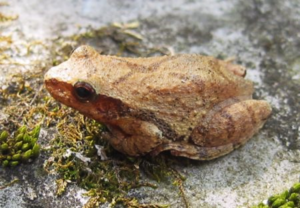 An adult spring peeper, a native amphibian to VT & NY, distinguished by the “X” mark on its back. Photo © E. Talmage, The Vermont Reptile & Amphibian Atlas.

Is it a bird? No. A cricket? Close! The shrill chorus of spring peepers is the chime of spring. They are among the smallest and certainly one of the most common species of frog in the Lake Champlain watershed. You can discern a spring peeper up close by a dark imperfect X pattern, contrasted against shades of brown, on its back. The “X” begets its scientific species name crucifer which means, “one who carries a cross.”

The appearance of tiny peepers signals to northeasterners that we are emerging from winter. For humans, spring prompts changing tires, putting away winter coats, and getting the garden ready. For peepers, spring triggers a single action: reproduction.

Peepers, along with other amphibians, migrate to breeding sites on warm and rainy April nights. Spring peepers move from hardwood, softwood, and mixed woodlands to nearby wetlands. In our region, the “Big Night”—mass amphibian migration—has passed, though breeding dynamics continue to unfold. Spring peeper breeding calls begin in March and can last through July. In the Lake Champlain watershed wood frogs are the first to call in the spring.

During breeding season, no wet site is off limits to mating peepers, as long as wetland vegetation abounds: a grassy ditch or muddy pool will do, in addition to defined wetlands like ponds, marshes, and swamps. Peepers call from vegetation along the perimeter of waterbodies, often forming a choral group. Though peeper adults are tiny in stature, 1 to 1.5 inches long (the size of a quarter), their call is mighty. Peepers fill their vocal sacs with air, like humans fill balloons; the vocal sac expands to nearly the size of an adult peeper body. As air moves over their vocal cords, the “peep” forms. Each peep sounds like a high-pitched single whistle, ending with an upward slur. Herpetologist Jim Andrews, coordinator of the Vermont Reptile and Amphibian Atlas, describes a second spring call, where peepers break their continuous up-slurred whistle into segments—the same pitch and length, but broken. You can listen to the amorous calls on the database amphibiaweb.org, produced by the University of California, Berkeley. Males use this auditory indicator to signal to females that they are ready to mate. The peak calling time for peepers falls at the beginning of May—listen for male calls across the landscape, sounding off in a chorus forte.

The breeding process continues when a female seeks a male and touches him to indicate a match before mating takes place; the male then climbs onto her back. The female lays an abundance of eggs, from 800 to 1,000, attached singly or in bundles of two or three eggs to submerged vegetation such as sedges and grasses. Males will remain at the breeding site for up to a month, while females disperse after one to two days. The eggs hatch in about six days and develop for two to three months as tadpoles. Tadpoles typically transform to frogs around July.

When breeding comes to a close, peepers establish home ranges around downed woody material and other vegetation. They are nocturnal predators and feed on small invertebrates like ants, flies, spiders, and even ticks. Yes, the tiny spring peeper can help humans and moose alike combat the perils of tick season!

As leaves change color throughout the northeast in the fall, peepers transition too. Peeper hibernation on land begins in November and lasts through March. You may still hear a spring peeper call on a warm fall day; this call is typically from foraging areas, not breeding sites. In comparison to the breeding call, it is shorter and doesn’t include the upward slide. Jim Andrews says it lasts as long as the call of the chipmunk and has been heard from leaf litter and off of the ground. He explains that the call seems to be stimulated by date length and temperature—the transition from fall to winter. Peepers hibernate under logs, moss, leaves, or behind loose bark on trees, and they benefit from the additional insulation of snow. The buildup of glucose, a natural antifreeze, in their blood and tissues buffers peepers from freezing temperatures.

Healthy wetlands provide critical habitat to support healthy spring peepers. Spring peepers have a state rank, which reflects the relative rarity of a species, of S5 (common and widespread) in Vermont and New York. Jim Andrews notes, “Spring peeper populations seem to be healthy region wide, but they have disappeared from some locations and we are not sure why. They are short-lived, so poor breeding conditions such as multiyear drought, could wipe them out from an area. As with most other species, habitat loss, fragmentation, and degradation are the main threats.”

Conserving wetlands as well as adjacent foraging and overwintering habitat, where peepers spend most of the year, is essential to their survival. Water pollution is always a concern for population health. Amphibians are vulnerable to toxins because they’re easily absorbed through their eggs and thin skin. C. Kenneth Dodd, author of Frogs of the United States and Canada, writes that spring peepers are sensitive to heavy metals, low pH—below 4.2 (on a scale of 0 to 14, where 0 is acidic, 7 is neutral, and 14 is basic), and the herbicide atrazine.

Protecting wetlands and preventing contaminants from entering waterways are longstanding priorities for the Lake Champlain Committee. We have helped advance legislation and regulatory changes to restore these vital areas and support a net gain of wetlands in the Lake Champlain watershed. We also advocated for the first lake-wide toxic contaminant study, which led to the discovery and clean-up of polychlorinated biphenyls (PCBs) from the Cumberland Bay sludge bed. Healthy wetlands are crucial to the biodiversity of our region, including spring peepers. The spirited and shrill call of peepers echoing across our wetlands and woodlands is a welcome sign of spring and of good habitat—we don’t have to see them to enjoy them.