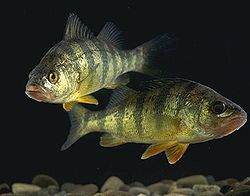 Read “Counter Currents” to learn how fish, like these yellow perch, extract oxygen from water. Image from Wikipedia.org.

Take a deep breath. In. Your lungs fill with cool, oxygen rich air. Out. The exhaled air  has less oxygen, more carbon dioxide. The average adult at rest breathes twelve times per minute, all for the purpose of exchanging gases in the lungs, to bring oxygen to our blood cells. Fish need the same oxygen, but it is much more difficult to get from water.

Respiration is the process by which gases are exchanged between the body and the outside environment.  Respiration has two principal components: breathing or ventilation – the movement of an external medium (air or water), and gas exchange – the trade of oxygen and carbon dioxide between blood and that medium. Both ventilation and gas exchange are more difficult in water than in air.

Ventilation is a problem because water is so much thicker than air. As a mediocre swimmer, I’ve occasionally involuntarily tried to breathe water; it doesn’t work very well. Inhaling might be possible, but exhaling is particularly difficult.

Fish therefore use a completely different mechanism for extracting oxygen from their environment. Rather than ventilating water into and out of their body, they move it over an external gas exchange surface, their gills. Some water can be forced through the gills by swimming, and indeed for sharks this is their only form of ventilation. That means they must swim continually.  Most other fish actively swallow water to force it over their gills. If you have ever watched fish in a tank you can sometimes see them opening and closing their mouths to force ventilation.

The limited availability of oxygen in water compared to air makes gas exchange difficult. While air contains about 21% oxygen, even the best cold, clean, well-aerated water contains only perhaps 0.0013% oxygen. If we were equally efficient at extracting oxygen from water as we are from air we would still need to breathe about 2,000 times per minute just to get the same amount.

Gills operate by means of counter-current exchange. Counter-current exchange means two currents move in opposite directions. In gills the two currents are fish blood and water; blood enters the gills from the opposite direction that water does. As the blood vessels come into the gills they branch repeatedly, creating more surfaces for gas exchange. The entering blood is very low in oxygen. What oxygen it had carried was used by muscles. Because the two currents move in opposite directions, the most highly oxygenated blood encounters the most highly oxygenated water while the least oxygenated blood encounters the least oxygenated water. Therefore, along the entire period of their exposure to one another, oxygen will diffuse passively from the water into the blood.

Ducks and wading birds use counter-current exchange to keep their legs warm in chill water. Warm blood moving out of the body of the birds into the legs encounters cool blood travelling up from the feet. Heat is exchanged from one set of blood vessels to the other throughout the period of their contact. As with fish gills, blood vessels in the legs branch around one another. This process conserves most of their body heat rather than losing it to the atmosphere. The system is so efficient that a duck will actually lose more heat from feathered parts of its body than from its exposed feet and legs.

The amount of oxygen available in the water can limit the species of fish that will live in a given habitat. As water temperature increases, the amount of oxygen decreases, just as a warm soda loses its carbonation faster than a cold one. Also, still water will rapidly lose its oxygen. Fish breathe some of it; decomposers use some breaking down dead algae or other microorganisms. Oxygen can get back into the water through turbulence or waves capturing air or when plants photosynthesize.

Fish limit their need for oxygen by not maintaining a regular body temperature (they’re cold blooded). Much of the oxygen we take in goes to keeping us warm, keeping our cells working. By taking on the temperature of their surroundings, fish avoid this need for energy and oxygen.

Snow covered ice can quickly create an oxygen poor environment. Without the snow, some photosynthesis can still occur. Without the ice, waves help oxygen to diffuse into the water. One means by which fish cope is to lower their activity level during the winter. Just like you breathe harder after exercise, fish breathe harder if they are more active.

Still, at the end of a particularly tough winter carcasses of dead fish might litter the surface of ponds that have had a hard freeze. Even the most efficient counter-current exchange can not extract oxygen that has been exhausted from the water.