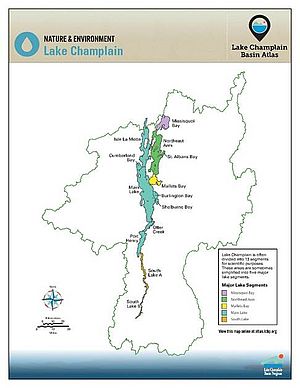 The single entity of Lake Champlain contains five distinct segments, each with its own character: the South Lake, the Main Lake, and, east of the islands, Malletts Bay, the Inland Sea, and Missisquoi Bay.

The thin, narrow South Lake stretches thirty-miles between the lake’s inlet at Whitehall, New York, and the Crown Point Bridge. This lake segment is much like a river in appearance, and early colonial navigators actually referred to it as an extension of Wood Creek rather than Lake Champlain. The South Lake receives most of its water from three tributaries—the Poultney, Mettowee, and La Chute rivers. In all, more than 15 percent of the lake’s drainage basin empties into this segment, which contains only 0.6 percent of the lake’s water. Many invasive species, including water chestnut and zebra mussels, first appeared in the South Lake, having migrated via the Champlain Canal. The zebra mussels have increased the water clarity, allowing denser growth of water chestnut and other aquatic plants. The weeds provide great habitat for fish and wildlife but can make swimming and boating a challenge.

The Main Lake, stretching between Thompsons’s Point and the mouth of the Richelieu River, covers nearly 300 square miles and contains over 80 percent of the lake’s water volume. The basin’s two principal cities, Plattsburgh, New York, and Burlington, Vermont, sit on the shores of the Main Lake. As befitting its size, the Main Lake contains a diversity of habitats, including bright sand beaches, cobble shorelines, the stunning cliffs at the Palisades, and dots of islands poking above the water surface. The Green and Adirondack mountains, with their play of light and shadow, frame the vistas.

At about midpoint on the Main Lake’s north-south axis, Grand Isle divides the waters. Areas west of Grand Isle are still considered part of the Main Lake. To the east sit Malletts Bay, the Inland Sea, and Missisquoi Bay.

Malletts Bay, the southernmost of these three eastern pieces, is isolated from other lake segments by an abandoned railroad causeway to the west and a road causeway to the north. Malletts Head and Red Rock Point pinch the bay into two distinct segments, an inner bay and an outer bay. The Lamoille River, the bay’s largest tributary, enters the outer bay, while the Winooski River delta forms much of the southern boundary (though the Winooski itself drains to the Main Lake). The bay contains steep drop-offs to deep water; half the outer bay is over forty-nine feet deep, but at the same time nearly 40 percent of the bay is less than twenty feet deep. The greater water volume dilutes nutrients, and thus cyanobacteria blooms are less frequent in Malletts Bay than in other lake segments. Malletts Bay hosts numerous marinas, since it is well sheltered from the weather, making it a very popular spot for boaters.

The Inland Sea, also referred to as the Northeast Arm, lies between Grand Isle and North Hero Island on the west and the shores of mainland Vermont on the east. It is not as broad or as deep as the Main Lake but physically and chemically resembles a smaller version of it. The Inland Sea covers 104 square miles, with an average depth of forty-two feet. Much of the Inland Sea is clear and cold, though shallow bays like St. Albans are more turbid. No major tributaries drain to this lake segment, a factor that likely helps protect its water quality. In recent years, however, a summer oxygen deficit in deeper portions of the water column has prompted concerns about a potential developing “dead zone.”

Missisquoi Bay fills a shallow basin at the northeasternmost portion of the lake, only fourteen feet deep at its maximum, but with over thirty square miles of surface area. Though larger in surface area than Malletts Bay, Missisquoi Bay contains less than one-third the water volume because of its shallowness. Three significant tributaries discharge into Missisquoi Bay—the Pike River, the Rock River, and the Missisquoi River. The Pike and most of the Rock catchments lie within Quebec. The Missisquoi is the second-longest river draining to Lake Champlain and drains over 10 percent of the entire lake’s catchment. High nutrient levels, which fuel cyanobacteria growth, and extensive sedimentation from the rivers make Missisquoi Bay one of the murkier lake segments, but also enable the bay to host abundant wildlife and excellent warm-water fishing.

Like individual courses of a fine meal, the lake’s segments blend together and add to the satisfaction of the whole. Each offers its own unique characteristics; together they magnify one another’s charms.