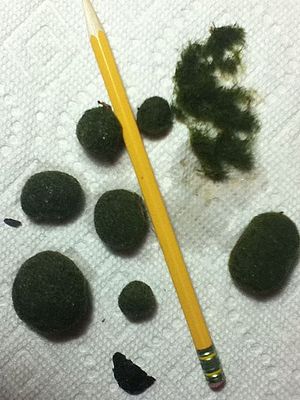 Little green balls of vegetation collected from the shores of Lake Champlain. Photo by Mike Winslow.

In late November a package arrived in the mail. It contained some round green balls that a friend had found on the shore of Lake Champlain in Panton, VT. , and she wondered what they might be. The balls vaguely resembled deer droppings but they were all green. LCC Staff Scientist Mike Winslow dissected one and found it completely composed of vegetation. We posted a photograph to LCC's Facebook page and it was shared broadly among algae ecologists.

The specimen was most likely a sample of a rare form of algae known in Japan as marimo.

The balls ranged in size from one to a few inches in diameter. They were found in the wave line along shore sitting atop more normal looking mats of green algae. Our first impression was that wave action had rolled the vegetation repeatedly until it formed the distinctive shape. However, if that were the whole story one would expect pieces from different species to be found within the ball, but the vegetation was remarkably uniform, suggesting a single species. LCC Advisory Council member Lisa Borre, a Senior Research Specialist with the Cary Institute of Ecosystem Studies, shared LCC's Facebook post with the Global Lake Ecological Observatory Network (GLEON). The scientists hit quickly on the identification of marimo.

Marimo is a growth form of the species Aegagropila Linnaei. The genus name is Greek for goat hair, and the balls did resemble clumped mats of coarse hair. Other common names include lake rollers, moss balls, and lake goblins. The species has three different growth forms: mats that grow on rocks, free-floating fragments, and the balls that were sent to LCC. In at least one lake the balls grow close to shore while mats grow in deeper water. The free-floating forms serve as a means for the species to spread, as sexual reproduction is quite rare.

The reason the balls form is a subject of some speculation, but an article in the prestigious journal Nature suggests it is a means for the species to maximize the biomass of a colony under appropriate conditions. The balls grow slowly, only about 1 cm per year. They can reach a maximum diameter of about 40 cm (a little over 16 inches), but the balls from Lake Champlain were all less than 8 cm (three inches).

Though rare, the species has been recorded in at least 233 separate waterbodies around the world. The majority of these are in central and northern Europe. The country with the most locations is Sweden with 51, followed by Germany, Britain and Ireland, Japan and Russia. Most records are from freshwater lakes in areas that were once glaciated though there are reports from brackish waters in the Baltic, Black, and Caspian Seas as well as Britain and Ireland. There have been a few reports from North America with the earliest records dating from the late 19th century, but we have not seen any previous reports from Lake Champlain.

In Japan, the lake balls are celebrated. Local mythology attributes the origin of marimo to a pair of young lovers that drowned in Lake Akan and their hearts turned into the balls. In 1921 they were declared a Japanese National Treasure. Since the 1950s there has been an annual festival on the island of Hokaido celebrating the alga.

In Iceland, where the little balls also have a postage stamp, the habitat of marimo is considered threatened. They have disappeared from Lake Mývatn. Scientists blame increasing nutrient levels that have decreased the ability of light to penetrate to the lake bottom where the species grows.

Marimo have become a popular aquarium plant. They grow in regular tap water at room temperature so long as they are exposed to sunlight. Kits can be purchased on-line for less than $30, though at least one sample originating in Asia had invasive mussel larvae mixed in with the plants. On-line care instructions recommend changing the water every two weeks, and flipping the balls occasionally to maintain their round shape and ensure equal exposure of the whole ball to light.

It is not clear where the Lake Champlain marimo came from. Given the number of them and their size it is most likely that they have been growing in the lake for some time. Lake Champlain offers appropriate habitat, calcium-rich clear waters and moderate nutrient levels (at least in the Main Lake). However, they also could have originated in a release from some aquarium. (Note: it's never appropriate to dump aquarium water or contents into a waterbody as you can easily introduce new species.) The reality is we know very little about the species that live on the bottom of the lake. They could have been there for some time without anyone noticing. There is much still to be discovered even in our own backyards, and observant naturalists can help expand our knowledge of the lake.