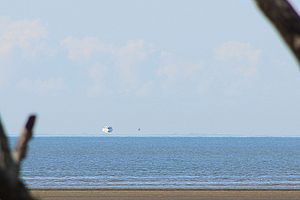 A ship appears to hover above the horizon. Image from Wikipedia.

Very cold air coming in over a relatively warm lake can create visions of floating islands in the sky. These are inferior mirages. Inferior not for their lack of grandiosity, but because you are viewing an image below where it is actually located. The islands float because your brain perceives part of the sky to be positioned between them and the water.

Light bends toward cooler denser air, so when a warm layer of air rising up from the lake sits between it and the cooler upper atmosphere, the light entering your eye does not travel a straight line from its source.  However, your mind interprets the light as having traveled a straight line, and therefore places the image generated on a straight path, at the water surface. Thus you view the white clouds of the sky in a place where they aren’t. Meanwhile, the light from the land on the horizon does not pass between the two layers of different temperature air, so your mind correctly interprets their location.  It is the same process that leads to pavement seeming to hold pools of water on a hot summer day. For inferior mirages to occur there must be at least a 30 degree Fahrenheit difference in temperature between the surface layer of air and higher elevation air. The mirages are stronger the greater the difference in temperature.

During the springtime, you can sometimes see superior mirages, where the image appears above its actual location. These occur when warm air masses move over the lake while the water retains winter’s chill. Superior mirages can take on different forms. When the difference in temperature between the ground layer and the air is very high, the mirage may float in the sky upside down above the actual object. In these cases, even if the object is below the horizon, the mirage may still be visible. Such superior mirages may account for many sightings of UFOs, where headlights from distant cars became visible for a brief moment before quickly disappearing. When the temperature differential between the two air layers is not so great, distant objects simply appear elongated.

Mirages are not simply a trick your mind plays. The light rays actually do bend. Thus they can be captured with photographs.  So here’s a challenge: next time there’s a big difference between water and air temperature see if you can photograph a mirage and send the image to lcc@ lakechamplaincommittee.org. Happy hunting.