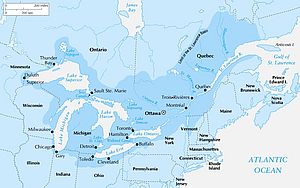 Both the Great Lakes watershed and the Lake Champlain watershed fall within the larger St. Lawrence River watershed.

For a brief period in 1998, the United States government officially recognized Lake Champlain as one of the Great Lakes. The designation allowed Vermont institutions access to funds reserved for states which bordered an ocean or a Great Lake, but Midwestern officials were outraged that Champlain might share a designation with their lakes. After much media attention and hyperbole Congress rewrote the designation, and Lake Champlain reverted to a great lake while retaining the funding opportunities.

Aside from the legal ramifications of a Great Lake designation for Champlain, what geographical or ecological considerations link the water bodies? By virtue of sitting on similar latitudes, the Great Lakes and Champlain share similar watershed ecosystems, dominated by deciduous forests, and seasonal climates. The systems have similar origins, both having been carved by glaciers from pre-existing riverbeds. The systems even have a hydrologic connection through the New York State Canal system, which has allowed many of the invasive species that arrive in the Great Lakes on commercial ships to eventually reach Champlain.

However, narrow focus makes managing larger watersheds difficult. Problems in the receiving body seem distant and remote to those nestled in smaller areas that appear clean.  An extreme example occurs in the Gulf of Mexico, where a large area of nutrient enrichment has created a “Dead Zone”, yet the source of the nutrients might be far upstream in the heart of the country along the Mississippi River drainage.

On the plus side however, when an emotional attachment to a local water body energizes more people, focus on smaller watersheds has positive downstream affects. Numerous tree plantings and volunteer activities have been conducted throughout the Lake Champlain Basin by people who wanted to help their nearby river, but the lake those rivers feed benefits too. Similarly, allowing institutions in the Lake Champlain watershed to utilize resources previously reserved for the Great Lakes has increased the breadth and diversity of ideas and research brought to bear on Great Lakes issues. And these ideas can be transferred further downstream to improve the St. Lawrence River too.

Water is a resource that links people across broad geographic spans. Whether the watershed is that of a Great Lake or a small pond, the water eventually passes through en route to another community. Wherever you wander on earth, you are in a watershed. Treat it with care and affection.