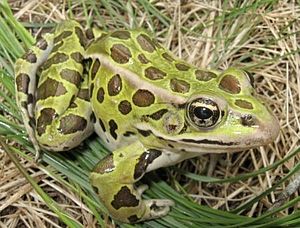 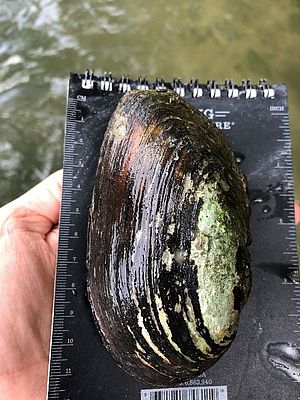 When it comes to the wicked cold of winter, wildlife and humans are in it together: we bundle up, bunker down, hibernate, or head south. A plunge below Lake Champlain’s surface reveals the winter adaptations of hardy wildlife—it’s like watching a nature documentary in slow motion.

The northern leopard frog, Lithobates pipiens, Vermont’s state amphibian (New York doesn’t have one) is relatively common in and around Lake Champlain. It has a pattern that textile designers drool over: leopard spots on a golden-green body. Northern leopard frogs require three habitats close together: they breed in marshes and floodplains, forage in wet open meadows and fields, and overwinter in permanent water, such as lakes, rivers, and ponds.

Lake Champlain-based northern leopard frogs are currently in or entering hibernation. They typically hibernate underwater, resting on or partially buried in organic matter and debris from October or November to March. Herpetologist Jim Andrews, coordinator of the Vermont Reptile and Amphibian Atlas, has found northern leopard frogs hiding under northern map turtles resting on the bottom of waterbodies. They rely on Lake Champlain because it doesn’t freeze all the way to its floor and has sufficient levels of dissolved oxygen. Oxygen levels matter because submerged frogs diffuse water entirely through their permeable skin and the lining of their mouths into a network of blood vessels. While Lake Champlain’s depths provide conditions for a northern leopard frog to take a winter rest, its shallow waters provide habitat for a popular winter sportfish.

Flashes of yellow-white spots on the dark grey bodies of lake trout (Salvelinus namaycush), commonly referred to as “lakers”, are the clear night skies of our deep and cool lakes. From October to November, lake trout spawn, releasing eggs and sperm for reproduction along the shallow shoals and rocky shorelines of Lake Champlain. Females produce 400 to 1,200 eggs per pound of body weight. After fertilization from one or more males, the eggs are broadcast over the lake bottom, where they incubate in rocky substrates over winter, without parental care. Picture millions of eggs currently nestled in the irregular bottom contours of Lake Champlain.

Lake trout are cold-blooded creatures: they don’t regulate their own body heat, so are influenced by external temperatures. In winter, multiple bodily functions decrease, such as oxygen use, heart rate, metabolism, and food intake. As surface water cools in the fall, lake trout relocate from deep waters to shallow waters along the shore and remain there through the winter, until just after ice disappears from the lake surface (ice-out) in the spring. In late spring and summer, when surface waters warm, they return to deeper waters.

In the 1800s, area lake trout populations were decimated by habitat destruction and overfishing. Current populations are sustained by hatchery stockings. Lake trout figure into the cultural, recreational, and ecological fabric of life for many families in New York and Vermont: year-round angling opportunities, connections with family and friends, and maintaining and improving habitats to support healthy populations. Lake Champlain, Lake Willoughby, the Adirondacks, and the Finger Lakes all provide superb fishing for lake trout.

Prized for their tasty flavor and abundance, yellow perch are the bread and butter of winter anglers. Their habitat preference is broad: they are commonly found in and around submerged beds of aquatic vegetation, rocky substrates at various depths, sunken logs and stumps, overhanging trees, docks, piers, and bridge foundations.

There are ample winter fishing opportunities for yellow perch in Vermont and New York: Lakes Champlain, Bomoseen, Carmi, Memphremagog, Morey, Oneida, Ontario, Seneca, and the Finger Lakes. This winter’s free fishing days are the ice fishing festival at Lake Elmore State Park in Lake Elmore, VT on Saturday, January 25, 2020 and the weekend of February 15-16, 2020 in NY. Folks without a fishing license are able to fish on these days.

It turns out that native fish are often connected, literally, to native freshwater mussels. When we think of mussels, images of edible saltwater mussels or the invasive zebra mussel come to mind. In fact, 18 species of native freshwater mussels are present in Vermont. When glochidia, microscopic larvae of mussels, are released into the water, they attach to the fins and gills of specific host fish. Eastern elliptio, Elliptio complanata, the most common native freshwater mussel species in our region, makes a pit stop on yellow or white perch or largemouth or smallmouth bass. After they develop into juveniles on the host fish, they’re shed into the water, where they settle into sediments and grow into adults. Freshwater mussels are water purifiers of the aquatic ecosystem. Largely sedentary, they filter microscopic plants and animals as well as pollutants from the water column while they breathe and feed.

Eastern elliptio is a tan-brown-black bivalve with a heavy, calcium-rich shell up to five inches long. It is found in lakes, rivers, and streams among clay, silt, sand, gravel, and cobbles. They anchor themselves with a muscular foot often cramming many individuals into a small space.

They will burrow deeper within lake and river bottom substrates to stay warm in winter or to avoid being washed away during flood events. If eastern elliptios don’t make this seasonal vertical migration in shallow waters, they risk being frozen solid or frozen into mobile ice cover. Their winter burrowing may allow them to live at a temperature closer to that of the groundwater—a refuge from frigid winter temperatures. The region’s native mussels are jeopardized by the overall degradation of freshwater ecosystems—contributing factors include bank erosion, stormwater runoff, dams, and the invasive zebra mussel, which outcompetes them for food and suffocates them by smothering.

The Lake Champlain Committee is actively engaged in conducting inventories of these magnificent animals in the Lake Champlain Basin, in partnership with Arrowwood Environmental and The Nature Conservancy of Vermont.

We all adapt to the cold in different ways. As you don a wool hat, stoke your wood stove, or head south, keep the wildlife wonders of Lake Champlain in mind.