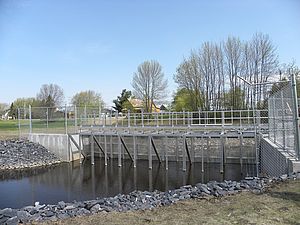 LCC Board members visited the barrier dam during a spring meeting in Quebec. Photo by Jessica Rossi.

Earlier this year, an innovative sea lamprey barrier was put in place on Morpion Stream, a tributary of the Pike River in Notre-Dame-de-Stanbidge. The barrier addresses one of the largest uncontrolled populations of sea lamprey on Lake Champlain by preventing adult lamprey from migrating to spawning habitat. Morpion Stream provides 17 miles of potential spawning habitat upstream of the dam. An estimated 150,000 larvae reside in the sediments.

While barrier dams have been used to block lamprey spawning in other areas the design of the Morpion barrier is unique. A sorting trap collects most fish species in the first chamber, but allows lamprey to pass into a second chamber from which they can be removed and killed while non-target species are passed upstream. A series of floats atop the dam pivot during high water to prevent debris blockage and upstream flooding. The barrier will only be in place during the spring when lamprey spawn. Modular construction allows the entire structure to be removed once spawning ends.

Throughout most of Lake Champlain sea lamprey are controlled with chemical pesticides. However, application of any pesticides to flowing waters is prohibited in Quebec by provincial statute.

LCC has long advocated for non-chemical controls to suppress sea lamprey populations. We have been involved with a federally designated workgroup seeking alternatives to chemicals. The group evaluated a number of proposed alternative control mechanisms but most were not viable for field application or are still many years from practical use. Barrier dams, like the one now on Morpion Stream, are a promising option for some tributary streams. However, they are quite expensive both to build and maintain and not every stream has a suitable site for such a barrier.

Construction of the dam cost $1.3 million and was paid for with funds from the Great Lakes Fisheries Commission (GLFC) secured by Senator Leahy. The GLFC works on Canada and United States international fisheries issues in the Great Lakes and Lake Champlain; their funding comes jointly from the U.S. and Canada. Annual operating costs for the dam are expected to be about $25,000. The barrier will be collaboratively run by the US Fish and Wildlife Service (USFWS), and the town of Notre-Dame-de-Stanbridge. The USFWS checks the traps in the dam three times per week during the spawning season.