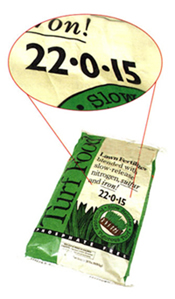 The middle number on fertilizer bags indicates the phosphate (phosphorus) content. A “zero” in the middle means its phosphorus-free. Photo by Media Partners.

The Vermont legislature joined seven other states in regulating the use of phosphorus fertilizer on lawns. LCC has long-advocated for this important step in reducing pollution to Lake Champlain. In 2003 we spurred an investigation of lawn phosphorus levels throughout Vermont that found 60% of lawns tested statewide and 76% of Chittenden County lawns already had too much phosphorus. We helped organize and have been active in the bi-state Lawn To Lake program that promotes use of no-phosphorus fertilizers. During last summer and fall we met with the Vermont Agencies of Agriculture and Natural Resources, the Lake Champlain Chamber of Commerce, and Senator Ginny Lyons to pave the way for the bill.

The legislation prohibits spreading of lawn fertilizer on impervious surfaces, between October 15 and April 1, or within 25-feet of a waterbody. Phosphorus can only be used in fertilizers if a soil test demonstrates it is needed or if a lawn is just being established. Stores that sell phosphorus fertilizer need to display information about its impacts on water quality. Eliminating phosphorus from lawn fertilizer prevents the pollutant from ever being imported to the watershed.

The law goes into effect in January 2012. Until then LCC recommends everyone follow its guidance this year and only buy fertilizer with phosphorus if a soil test indicates your lawn needs it.

Thanks to all the legislators who worked on this bill and who voted for its passage. In particular we recognize Representatives David Deen, Kate Webb, Jim McCullough, Bob Krebs, and Kristy Spengler who sponsored the original bill in the House and Senator Ginny Lyons who helped guide it through the Senate.