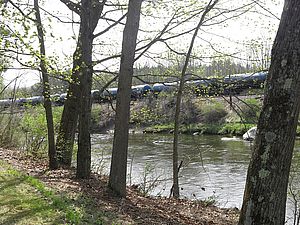 The Lake Champlain Committee and three conservation organizations from the Adirondack Park and Champlain Valley praised a decision by the NYS Department of Environmental Conservation (DEC) to rescind its 2014 decision not to require a full environmental impact statement from a company seeking permission to import heavy crude oil from Canada.

They also praised U.S. Environmental Protection Agency Regional Director Judith Enck, who sent a letter to the DEC on May 15 noting that the state had underestimated the potential for new air pollution emissions from the facility.  State air pollution permits must comply with the federal Clean Air Act.

Global Companies LLC of Massachusetts had sought a state air pollution permit modification from the DEC so it could install an oil-heating facility at the Port of Albany. Global intends to transfer thick tar sands crude oil from rail cars to storage tanks, and then on to ships in the port.

Trains carrying the oil would travel more than 130 miles along the shore of Lake Champlain, including more than 100 miles of which are inside the Adirondack Park.  The rails pass through a dozen Adirondack communities and cross several major rivers that feed the lake.  Lake Champlain is drinking water for 188,000 people.

Tar sands oil is thicker than the North Dakota Bakken crude oil currently being shipped by rail through the Adirondacks to Albany. It must be heated before it can be pumped in cold weather and it sinks in water, making clean-up virtually impossible.

“We are very pleased the DEC chose to consider much more than just the potential for increased air pollution when it decided to order a full environmental review of this project application,” said Neil Woodworth, Executive Director of the Adirondack Mountain Club.  “The State Environmental Quality Review Act obligates DEC to consider all potential environmental impacts. With so much at stake, DEC needed to take a much broader look.”

“The DEC’s air permit review gives the department jurisdiction over any environmental impact caused by the changes being made at the Port of Albany, including any increased danger to the health and purity of Lake Champlain and the rivers that feed it,” said William C. Janeway, Executive Director of the Adirondack Council.  “That’s not just the law; it’s the right thing to do. Clean water is the Adirondack Park’s most valuable asset.  It is the reason why the Adirondack Park and Forest Preserve were created more than a century ago. Our visitors and our communities need it.”

“We believe that the DEC has an obligation to protect our waterways and public health and safety, so we are pleased it will be taking a much more careful look at the potential environmental consequences of a derailment in sensitive locations,” said Lori Fisher, Executive Director of the Lake Champlain Committee. “A spill along much of this line could significantly pollute Lake Champlain. That means water pollution contamination of a drinking water supply for more than 180,000 local residents. That’s not a local impact, confined to Albany. That’s an interstate and international impact.”

“Just since the beginning of 2015, there have been five major oil train derailments in the U.S. and Canada, underscoring the tremendous risk posed by the massive increase in the amount of crude oil transported by trains in recent years,” said Mollie Matteson of the Center for Biological Diversity. “The state’s decision to examine the very real threat of tar sands demonstrates the importance of this iconic water body, and the communities along the tracks that will suffer when a train derailment occurs.”

A single tar sands oil spill in the Kalamazoo River in Michigan has cost more than $1 billion over the past three years and is not yet cleaned up. Because tar sands oil sinks in water, recovery rates of heavy crude spilled in water are usually less than five percent.

Recent derailments in the U.S. and Canada resulted in fires and explosions in relatively remote locations, sparing more populated areas from a devastating conflagration such as the one that occurred in July 2013 in Lac Mégantic, Quebec, where 47 people were killed by an oil train derailment.