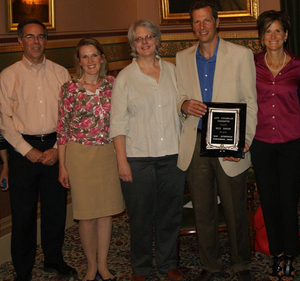 We were delighted to receive the 2013 Green Mountain Power (GMP) Meeri Zetterstrom award at a May ceremony at the Vermont State House. “The Lake Champlain Committee has been an active, constructive force for the betterment of Lake Champlain and the entire Champlain Valley for half a century,” GMP President and CEO Mary Powell said in delivering the award. “Like Meeri Zetterstrom, for whom the award is named, LCC has demonstrated a long-term commitment to building alliances to solve environmental problems, while pursuing education and environmental research. LCC’s determination and leadership, despite tremendous environmental challenges and obstacles, mirrors on a broad scale Meeri Zetterstrom’s leadership and commitment to saving ospreys at Lake Arrowhead."

Steve Costello, GMP’s vice president for generation and energy innovation, worked with Zetterstrom to restore Vermont’s osprey population and was on the employee panel that selected LCC for the award. He noted that LCC's 50th anniversary highlighted the deep and broad spectrum of its work. “Since its founding, the Lake Champlain Committee has taken a lead role in addressing virtually every issue facing Lake Champlain, one of Vermont’s most prized treasures,” Costello said.  “Its board, staff and volunteers have been among Vermont’s most prescient and thoughtful protectors of the lake and the thousands of species and hundreds of communities that rely upon it in Vermont, New York and Quebec.”

The Lake Champlain Committee’s first meeting was on May 17, 1963, when nearly 100 people met to organize to stop a proposal to build a shipping channel from the St. Lawrence River to the Hudson River, via Lake Champlain. The project was initially supported by legislative leaders, but LCC opposed the proposal and fought to protect the lake for swimming, boating, drinking water and its natural ecosystems. LCC won the ensuing multi-year battle and has been the lake’s leading advocate ever since. The GMP-Zetterstrom Environmental Award was originally created by Central Vermont Public Service in 2010, and is presented annually to one person, business, or non-profit to honor a significant contribution to Vermont’s environment. It is accompanied by a $2,500 donation. The award highlights the ongoing efforts of leading environmentalists and organizations, and the legacy of Meeri Zetterstrom, whose one-woman effort to protect ospreys led to the endangered birds’ recovery and removal from Vermont’s endangered species list. Zetterstrom inspired countless Vermonters through her dogged efforts to protect ospreys, which were decimated by DDT, which caused thin, brittle osprey eggs. “As we mark our 50th year, the GMP-Zetterstrom Award is a wonderful recognition of the Lake Champlain Committee’s work,” said Lori Fisher, LCC executive director. “Like Meeri, our founders were persistent and effective advocates for the environment. That work continues today with new issues and new challenges. We urge people who care about the lake to get involved.”