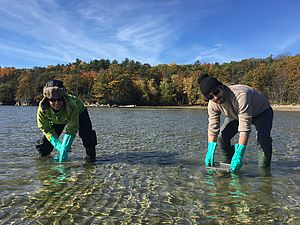 It was a sunny, crisp October morning. The rainy grey mist from the week before had cleared to reveal a stunning panorama of mountains, lake, and sand. On a beach just north of Burlington LCC staff and volunteers and a crew from Magic Hat Brewery, bundled in warm layers against the morning chill, arranged in a staggered line. Those with muck boots waded through the shallow water, while the others walked along the shoreline. Every few paces each stopped to kneel and scoop up sand in a small metal sieve. They then shook away the sand, as if panning for gold, examined the contents briefly – and discarded them.

It was a search for the Asian clam, an invasive species on the verge of entering Lake Champlain. LCC and Arrowwood Environmental are collaborating on a project to survey beaches for the pesky mollusk because early detection is key if there’s any chance of eradicating a population before it becomes established. Asian clams prefer to live in warm, highly oxygenated water with open sandy or gravel bottoms and limited plant growth. They burrow at or just below the surface of the sediment and form dense, thick mats. In Lake George, New York, densities have been found of up to 8,000 clams per square meter. In the summer we began inventorying southern Lake Champlain shoreline areas where they’d most likely colonize and moving north. Last month citizen volunteers and a team from Magic Hat Brewery helped us survey Burlington beaches. Using their sieves, volunteers combed the shoreline of Leddy Beach, North Beach, and Blanchard Beach for the invasive mollusk. Luckily we they didn’t find them.

Thanks to volunteer efforts, we can verify that Asian clams haven’t yet made it to Burlington beaches. (Click here to see a slide show from our training sessions and field day.) However, they continue to remain a threat to Lake Champlain. In 2007, this species was documented in Lock 8 of the Champlain Canal, only two locks away from the Lake Champlain side of the canal system. In 2010 Asian clams were detected in Lake George, too late for authorities to do more than control their spread. In 2016, Asian clams were discovered in Lake Bomoseen, Vermont, where they inhabit a portion of the lower lake. Lake George drains into Lake Champlain along the La Chute River in New York. Lake Bomoseen drains into Lake Champlain via the Castleton and Poultney Rivers in Vermont. In 2009, the species were documented in the St. Lawrence River near Becancour, Quebec. Lake Champlain appears to be surrounded.

The Asian clam is a hermaphroditic mollusk that is invasive to North America, which means not only that it’s non-native (a species that didn’t evolve in its current ecosystem), but that it actively harms the environment, the economy, and/or human health. Asian clams can reproduce both quickly and asexually, it only takes one to start a population. A single adult Asian clam can produce approximately 35,000 larvae per year, making eradication near-impossible once they become established. Current research suggests that water temperatures must rise above 59 degrees Fahrenheit for their reproductive cycle to become active, but even with this limitation they can spread quickly.

Large infestations of the Asian clam can out-compete rare native mussels, with the potential to push endangered species into extinction. They release inorganic nutrients, including phosphorus and nitrogen, as they burrow into the sediment and excrete waste. These nutrients, in turn, can decrease oxygen in the water, increase algae growth, and trigger toxic cyanobacteria blooms. Mass deaths of Asian clams, which usually occur in the summer when their population peaks, further degrade water quality as they decompose. After Asian clams die their shells remain on the lakebed. This provides an ideal environment for the invasive zebra mussel, which thrives on the hard shell surfaces and abundant calcium deposits.

Asian clams are also a problem economically. Because of the small size of their larvae and their remarkably high rate of reproduction, the clams can easily clog industrial water systems, including pipes in power plants, water treatment plants, and irrigation systems. Their ability to “biofoul” human-made structures costs an estimated $1 billion per year in the United States.

Where do they come from?

Asian clams are native to tropical waters in Asia, the eastern Mediterranean, and Australia. They were first introduced to the West Coast of the United States around 1930. It’s assumed they were imported as a food source for Chinese immigrants, but it’s also possible they came over with the Giant Pacific oyster – which was itself imported as a food source due to dwindling native oyster populations. In 1938 live Asian clams were detected for the first time in the Columbia River, Washington, where they had already established a large population. Since then populations have spread aross the country, and today are found in 38 states. This time-lapse map, produced by the U.S. Geological Survey, shows how quickly the invasive mollusk can spread. It is vital that uninfested water bodies, such as Lake Champlain, remain alert for incoming invasive species like Asian clams.

How can Asian clams be controlled?

There has been limited success with controlling Asian clam populations once they become established in a water body. The most common control method is the use of benthic barriers, which are rubber or PVC mats spread out to cover areas of the lake bottom. These barriers suffocate the clams by reducing dissolved oxygen levels.

The best way to combat Asian clams, however, is to stop their spread to new waterbodies. When using recreational equipment in the water, remember to always clean, drain, and dry. Clean off all mud and plant fragments, drain away all the water, and dry every surface with a towel before air-drying in the sun for five to seven days. If air-drying isn’t possible, use high-pressure hot water to thoroughly rinse your equipment.

While the threat of Asian clams in Lake Champlain is serious, the search for them can be fun. "Feels like I'm 8 years old again in the sandbox. It's fantastic," said Chris Rockwood, head brewer at Magic Hat and one of many volunteers sifting through the sand that sunny October morning. Each scoopful of sand, shaken through the metal sieves, left behind a wealth of shells for volunteers to sort through while looking for the invasive. Asian clams have a triangular shell ranging in color from greenish-yellow to dark brown marked by concentric bands that form ridges you can feel so they are easy to distinguish from the native fingernail clam which volunteers found in abundance in the sieves.

LCC and Magic Hat will be teaming up again in the warmer months to continue the search for Asian clam. If you’d like to join our future efforts fill out our Volunteer Response Form and check the box for “Aquatic Invasive Species Monitoring and Harvesting”.