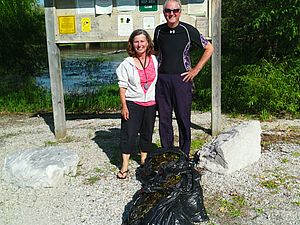 LCC has received a grant from the Lake Champlain Basin Program to map and manage populations of floating leaved invasive plants, water chestnut and European frog-bit, in the northern portion of Lake Champlain. We will be working in collaboration with Arrowwood Environmental. Frog-bit and Water chestnut are two Aquatic Invasive Species (AIS) which can infest large areas and threaten native aquatic species and communities. The species are well established in the south lake and it is imperative that they not expand their foothold in the northern lake. The most effective time to control AIS infestations is in their early stages. The Missisquoi National Wildlife Refuge has identified water chestnut in numerous locations within its boundaries as well as two populations spreading outside their boundaries into Missisquoi Bay. The work builds on and expands previous assessments LCC and Arrowwood have conducted. We will be seeking assistance from volunteers for frog-bit harvesting at known populations in the summer so anyone interested in helping out please contact us at lcc@ lakechamplaincommittee.org.