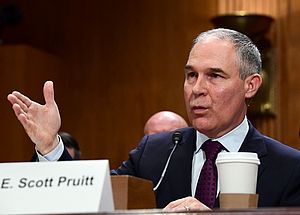 Scott Pruitt, nominee for the EPA Administrator job, could put at risk decades' worth of environmental progress. Photo by Ron Sachs.

Last month, LCC, the Conservation Law Foundation, Vermont Energy Investment Corporation, Vermont Natural Resources Council, and others called for Senators to vote against the appointment of Oklahoma Attorney General Scott Pruitt as EPA Administrator. Mr. Pruitt is a climate change denier who has an extensive record of suing the EPA to block them from enacting vital safeguards for the nation's air and water. He has led litigation against the landmark climate rule for power plants, as well as water regulations and standards for ground-level ozone pollution, haze and methane. "These lawsuits reflect an intent to undermine EPA's authority and the environmental regulations that safeguard our natural resources and public health", stated LCC Executive Director Lori Fisher. "Pruitt's efforts to block implementation of the Clean Power Plan and the Waters of the US regulations are deeply troubling and signal that he does not support the mission of the Agency he is nominated to represent."

Vermont and New York policymakers have long recognized that clean air and clean water are fundamental to public health, the environment, and the economy. While New York plans to get 50% of its energy from renewable sources by 2030 and Vermont's goal is 90% by 2050, Mr. Pruitt sued EPA to block implementation of the Clean Power Plan. Similarly both states have adopted mandatory pollution targets to clean up Lake Champlain, but Mr. Pruitt sued EPA to halt the Waters of the United States (WOTUS) regulations, rules to help achieve our national goal of drinkable, swimmable, fishable waters.

In a letter to Senators expressing opposition to Mr. Pruitt's appointment, LCC and other signatories noted that Pruitt's denial of the science of climate change should disqualify him for the position of EPA Administrator. He has falsely claimed that the climate debate "is far from settled" and that "scientists continue to disagree about the degree and extent of global warming and its connections to the actions of mankind." The most recent decade was our region's hottest on record, shifting water cycles and posing threats to agriculture, forests, infrastructure, tourism, health and homes. The groups warned that "if confirmed, Mr. Pruitt seems intent on undermining EPA's authorities, cutting federal funds available to invest in much-needed clean water infrastructure at the state level and disrupting our national response to climate change."