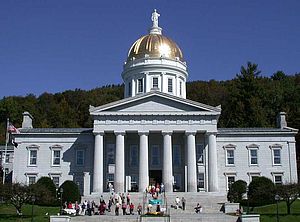 In the 2014 Vermont Legislative session the legislature debated bills to increase requirements for protecting lake shores, regulate toxic chemicals and provide more funding for water quality projects. The lake shore protection bill passed and awaits the Governor's signature, the toxics bill is still being debated but the water quality funding bill fell apart. The New York legislature has been considering a bill to eliminate microbeads from cosmetics after such beads were found polluting the Great Lakes. Read on for more information on each of the bills:

Shoreline protection - The biggest bill affecting water quality to come out of the Vermont Legislature this session affects efforts to protect lakeshores. After the Vermont House passed a bill last year a committee of the House and Senate spent the summer touring the state to hear feedback on the proposal. The Senate then passed a bill with much more detail than the original House version. The Vermont House and Senate agreed on compromise language in the shoreline protection bill. The compromise allows towns with ‘functionally equivalent’ standards to administer their own program as requested by the House, but it keeps standards in the bill rather than deferring them to the Agency of Natural Resources as the Senate requested. The bill requires a permit for significant clearing of vegetation or expansion of impervious surface along lake shores. Clearings of less than 100 square feet of vegetation at least 25 feet from the shore or construction of less than 500 square feet of impervious surface would not require a permit, but would require registration. The registration is designed to prevent sequential projects that cumulatively would have a significant impact. Routine site maintenance like mowing an existing lawn or clearing dead or dying trees would be exempt from any regulation. To receive a permit the property owner would need to demonstrate that steps have been taken to minimize disturbance. For parcels where existing development puts them out of compliance with the regulation, any new construction has to occur as far from the water as possible and expansion of existing structures can only take place away from the water.

The compromise bill has been approved by the Senate, and the House and awaits Governor Shumlin’s signature. It will take effect July 1. LCC has worked on this legislation to safeguard habitat for over two years. The new legislation isn't perfect but the prospects for meaningful statewide lakeshore protections in the near future look good.

Toxics bill – A bill to regulate toxic chemicals in children’s products has been bouncing back and forth between the Vermont Senate and the Vermont House as the year’s session rapidly nears completion. In the past, the legislature has looked at chemicals on a case-by-case basis, which a number of members felt was time-consuming and not sufficiently comprehensive. The toxics bill would give broader authority to the Department of Health, which has greater capacity to review the impacts of a broad swath of chemicals. As a starting point, the bill adopts a list of 66 chemicals regulated by the state of Washington. Additions to that list can be made by the Department of Health and reviewed by a committee. The Legislature’s actions grew out of frustration with the federal Toxic Substances Control Act which hasn’t been updated since the 1980s.

Both Vermont legislative bodies have approved versions of the bill, but they have been struggling to reconcile their versions. The make-up of that committee has been one point of contention between the two bodies. Each body has requested amendments to the other’s bills just this week.

Manufacturers have lobbied hard against the bill. Governor Shumlin has indicated that he prefers the House version of the bill.

Water quality funding – Disappointingly, the House abandoned efforts to increase revenue for lake clean-up. LCC and others had offered revenue proposals and a legislative committee had recommended an increase in the state’s rooms and meals tax and a surcharge on rental cars which would have raised about $4-million per year. However, support for the proposals did not materialize and the Governor expressed opposition to raising additional money for lake cleanup.

“No matter what policies the state puts forward to address water pollution, they are meaningless if the agencies tasked with doing the work don’t have the resources to translate those policies into actions,” said LCC Staff Scientist Mike Winslow.

Microbeads - On Monday May 5, the New York Assembly unanimously passed a bill to eliminate microbeads from cosmetic products. Microbeads are small plastic used as exfoliants. Recent research on the Great Lakes has shown that microbeads can accumulate appreciably in freshwater systems.

There is growing concern that the plastics have an environmental impact beyond just being litter. Studies indicate that microplastics may provide a means for persistent chemical pollutants like PCBs and dioxins to be transferred from the environment to aquatic organisms. The beads can absorb the contaminants and then get ingested by small animals. Fish may mistake the small floating particles for food and eat them. A study out of the University of California – San Diego suggested that fish in the northern Pacific Ocean swallow between 12,000 and 24,000 tons of plastic each year. The Senate still needs to take action on the bill.