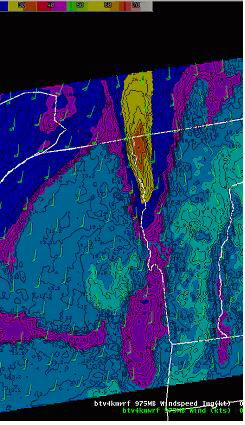 On October 31, 2009 winds buffeted the Champlain Valley stirring the leaves of Halloween. The winds were sustained over a twelve hour period. The next day, the Plattsburgh Press Republican reported wind damage from throughout Essex and Clinton Counties. The cause of the winds was a low-level jet that had developed over Lake Champlain.

The National Weather Service defines a low-level jet as a region of relatively strong winds in the lower part of the atmosphere, and they described the phenomenon in their Champlain Weather Chronicle of October 2008. Low-level jets develop about five to ten times per year in the region.

Eurasian water milfoil (milfoil) is the bane of many a lake user.  This aggressive non-native plant invades lake systems and spreads prolifically, choking out other plants and making swimming, boating, and fishing more difficult.  New populations arise from small fragments of plant that become established in a water body.  Further fragmentation then expands the population. Between 2005 and milfoil’s first US appearance in 1942 the plant had spread to 45 of the 48 lower United States according to the USGS Non-indigenous aquatic species web page.  When it comes to invasive aquatic plants, milfoil is the monster of them all.  Yet, in some cases, milfoil can help prevent algae blooms, while high densities of algae can limit the growth of milfoil.