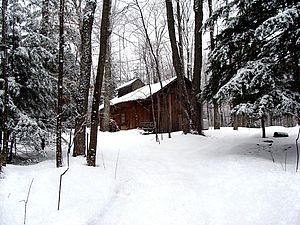 Maple sugar houses are in full swing this March, as maple sap flows! Photo from Pixabay.

Maple sugar houses across New York and Vermont host open houses during the weekend of March 23-24 - and festivities continue in New York the following weekend, March 30-31.

Celebrate maple sugaring season in the Champlain watershed by sampling maple products, enjoying pancake breakfasts with fresh syrup, and touring the woods and facilities where the sweet brew is made.

Maple sap is an integral crop in the Lake Champlain watershed. The province and both states are leading contributors to global maple production. Quebec is the world's top producer of maple syrup, with 10,672,550 gallons of maple syrup distilled in 2018. Vermont, comes in second, producing 1,940,000 gallons in 2018 – with New York in fourth place, at 806,000 gallons.

Sugar maples are the preferred tree to tap to make the golden elixir owing to the high sugar content of the sap of about 2%. Silver maple, red maple, black maple and ash leafed maple trees can also be tapped but their sugar content is about 1% so there’s greater efficiency and a sweeter taste to sap from a sugar maple. Finished maple syrup has a sugar content of about 66 – 67%. Sap is collected from buckets or tubed directly to a sugar house. The process of boiling down the sap to make syrup sends sweet maple-scented clouds of steam through the air. It takes roughly 40 gallons of sugar maple sap to make one gallon of maple syrup.

Cold freezing nights and warm days are needed to make sap flow, and the climate of northern states and east coast provinces of North America provides that combination. But climate change is already starting to take a toll, with sugar maples declining in southern and central New York State. When the maple trees are still dormant in the spring and day-time temperatures rise above freezing, it causes the sap to rise and flow out of a half inch wide tap hole, typically drilled about four and a half feet above the ground. Suction develops when the temperature drops back below freezing at night, pulling water into the tree through the roots and replenishing the sap. This allows the sap to flow again during the next warm period. Trees yield between between 5 and 60 gallons of sap per year, depending on the weather and the health and age of the tree.

Native American tribes including the Algonquin and Iroquois relied on maple sap, along with honey, as a primary sweetener. The Ojibwa allowed the sap to sour to make vinegar, which was mixed with maple sugar to cook meat. Some tribes used maple sugar instead of salt as a seasoning. Maple wood was turned into furniture, paddles, torch handles, oars, bowls, and other cooking tools. Maple also was valued for medicinal purposes. The Iroquois used drops of a bark infusion to treat blindness and applied maple sap to sore eyes. Maple sap was also used as a blood purifier and dermatological aid. Some tribes used maple bark to make a beverage and the Mohegans used the inner bark as a cough remedy.

Maple sap is a delicious, sustainable crop that encourages the protection of Northeastern forests - and it is used in a variety of creative ways. At the Maple Fest you can expect to find every maple-flavored thing you can imagine -- sugar-on-snow, distilled liquors, stout, cotton candy, raised doughnuts, hard cider, brittle, creemies, and more! Oh, yum!!