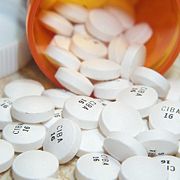 Looking for a safe, environmentally benign way to dispose of the unused or expired medications collecting in your medicine cabinet? You can drop them off at the Kinney Drugs store at 308 Shelburne Road in Burlington, Vermont on Saturday April 4. Another collection day will be held in the Plattsburgh, New York area later in the year. All drop off materials will be sorted by pharmacists and then either properly destroyed by law enforcement agents or disposed of at a federally licensed facility. By dropping off pharmaceuticals at a Medicine Collection Day you can help prevent accidental poisonings, substance abuse and environmental pollution. The event is free and open to the public.

The proper disposal of medications has increasingly become an issue of environmental and safety concern across the United States. According to a study conducted by the Substance Abuse and Mental Health Services Administration (SAMHSA), 70 to 80 percent of substance abusers said they took medications that belonged to a friend or relative. In addition, pharmaceuticals have been found in the drinking water of at least 41 million Americans, according to a March 2008 Associated Press investigation.

Medication brought to the drop-off must remain in the original bottle or package with the name of the product clearly visible. However, personal names and addresses may be removed or blocked out. Medicine Collection Day will be held from 9 a.m. until 6 p.m. at the Kinney Drugs location on Shelburne Road. The event is free and open to the public.