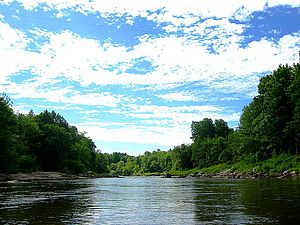 The Missisquoi River, an 80-mile long tributary to Lake Champlain, may get special status in recognition of its scenic and recreational qualities. Photo by mmahaffie on Flickr.

Earlier this week a Senate panel passed legislation to designate the Upper Missisquoi and Trout Rivers in Vermont as part of the National Wild and Scenic Rivers system. The Senate Energy and Natural Resources Committee passed the bill by Senator Bernie Sanders (I-VT), a committee member, and co-sponsored by Senator Patrick Leahy (D-VT). Companion legislation sponsored by Representative Peter Welch (D-VT) was introduced earlier this year in the House of Representatives. The National Wild and Scenic Rivers system was established in 1968 to recognize and preserve rivers with exceptional scenic and recreational value. Forty states have rivers listed in the Wild and Scenic Rivers system but the Missisquoi and Trout rivers would be Vermont’s first. LCC has been a supporter of the designation.

“This is a major step on the path toward designation, which will highlight the outstanding and remarkable scenic and recreational qualities of the Missisquoi and Trout Rivers. Many people in the local communities have worked hard to bring this designation to help us highlight the recreational use of the rivers while maintaining the rights of landowners and residents who have a stake in the rivers’ future,” said Jacques Couture, chairman of the Upper Missisquoi and Trout Rivers Wild and Scenic Study Committee.

“We are extremely pleased that the committee has moved the bill forward and we thank Vermont’s congressional delegation for their hard work toward making designation a reality,” he added.

The designation was unanimously recommended by a committee of local representatives that was created by Congress in 2009 to study the rivers. Town Meeting Day votes in Berkshire, Enosburg Falls, Enosburgh, Montgomery, North Troy, Richford, Troy and Westfield all supported designation.