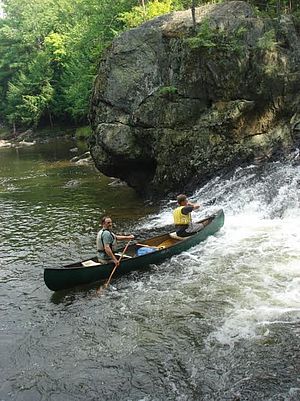 Legislation passed in early December will add portions of the Upper Missisquoi and Trout Rivers to the National Wild and Scenic Rivers System. Forty-one states and territories now have rivers listed in the system which was established in 1968 to recognize and preserve rivers with exceptional scenic and recreational value. The Missisquoi and Trout Rivers are Vermont’s first rivers to be added to the prestigious national river network. The path to enacting this legislation took over ten years and involved numerous community members and interested organizations. Support came from local towns, businesses, and state and federal agencies.

“There are several concrete benefits that will come out of this process,” noted LCC member and Missisquoi River Basin Association President John Little. He cited the availability of additional funding for river restoration and increased tourist attention in the region as examples. “All in all, it has been a long process, but it has been rewarding to meet so many of our local folks who do care about our rivers.”

“Vermont’s rivers are an essential part of our state’s rural character. The wild and scenic designation highlights the unique cultural, scenic and recreational qualities of these Vermont rivers,” the Vermont Congressional delegation said in a joint statement. “The recognition also empowers communities along the rivers to protect these resources.”

The Vermont congressional delegation began work on the designation back in 2007 at the request of local communities, when the initial legislation to authorize a study of this potential addition to the National Wild and Scenic Rivers System was first introduced. The measure was introduced by Sen. Bernie Sanders (I-Vt.) and co-sponsored by Sen. Patrick Leahy (D-Vt.) in the Senate. Rep. Peter Welch (D-Vt.) introduced the measure in the House. The House passed the legislation in mid-September and the Senate passed the measure in early December.

Designation under the Wild and Scenic Rivers Act will help protect the natural, cultural and recreational qualities of the Upper Missisquoi and Trout rivers, enabling continued enjoyment of the rivers by anglers, hunters and paddlers. It will also help maintain water quality within the rivers, as well as in Lake Champlain.