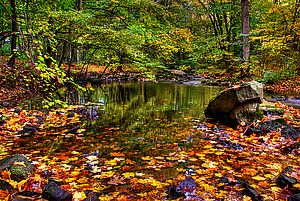 Leaves that fall into headwater streams provide the basis for aquatic food chains. Photo by slack12 via Flickr.com.

Autmn’s panoply of colors blankets the mountains of the Champlain Valley.  All summer the trees have been investing in short-term high-yield leaves to collect sunlight, and then placing the dividends in long-term wood.  Now, they’re dumping their investment before the inevitable downturn, knowing that winter’s snow and winds would be more likely to pull down good wood if they tried to hold onto their leaves. Many of those leaves will end-up in headwater streams of Lake Champlain where they represent the primary energy input for the river system.

For most ecosystems, energy comes directly from the sun, but that resource is less available for small streams. At their starting points streams are narrow, and during the growing season limbs arc out from the banks. Leaves on these branches intercept sunlight and extract its energy before it can reach the water. Without sunlight there can be no growth of plants or algae in the water.  Since plants usually form the base of any food chain, their absence represents a limitation, and the food chain is dependent upon whatever falls into the water.

As an energy source, fallen leaves are like the stocks of bankrupt companies:  they have the same general appearance as leaves on trees but much less value. Once in the water only bacteria are suited to take advantage of them as an energy source. In the process of feeding upon the leaves, bacteria transform the carbon (the energy source) into a form more usable to other critters while at the same time getting some of their necessary daily servings of minerals directly from the water column thus concentrating the minerals for organisms step up on the food chain.

Because of their ability to concentrate energy and nutrients even without sunlight, bacteria serve as the base of this relatively nutrient poor food chain. Mayflies graze them from leaves like we might scrape the filling off an Oreo cookie. Caddisflies spin webs that they sweep through the water to collect bits and pieces of detritus with attached bacteria. They then pull their nets into self-constructed rock hideaways where they can eat in peace. Thus, slowly, what little value was left in those discarded leaves is further concentrated.

The ability of organisms to accumulate nutrients is enhanced by an abundance of oxygen in headwater streams, perhaps akin to government programs or tax cuts depending upon your political inclination. There are two reasons oxygen is so prevalent in the upper reaches of streams. First, headwaters tend to have a steeper slope with more rocks. As the water leaps and cascades over the rocks in its rush downhill, it incorporates oxygen from the air. Second the interception of sunlight by arcing branches shades and cools the water. Cooler water can hold more gases like oxygen than can warm water. That’s why a soda left in the sun will go flat so much more quickly than one in the refrigerator.

While in general nature recycles its riches – leaf to soil to leaf again – those leaves that enter the river begin a one-way journey out of the system and toward Lake Champlain. Along the way the river accumulates more and more nutrient wealth:  from both natural and human sources. Natural sources include trees and animals, but also sunlight once the river becomes broad enough that trees no longer shade its entire width. Sunlight plus the higher concentrations of nutrients in the water permit algae and plant growth to supplement the bacteria at the base of the food chain.

Changes in the river’s shape that allow algae to thrive also result in less available oxygen. The absence of shade leads to an increase in water temperature, and the wider river has fewer cascades and ripples. Creatures seeking to utilize the excess nutrients must either be more sedentary to reduce their need for oxygen, or mobile enough to escape periods of temporary depletion.

There are few opportunities for resources to be redistributed back upstream. Some fish move upstream to spawn and then die representing one route of material transfer. Also, many aquatic insects hatch to flying terrestrial adults that instinctively head upstream to deposit their eggs.

Spring floods accelerate transfer of wealth downstream while at the same time providing some lateral movement from the river to the land. The energy of floods transports large slugs of sediment and debris toward the Lake. However some of the debris remains on land where it can be sequestered in soil or vegetation.

Once water reaches Lake Champlain it enters yet another ecological zone. Sunlight touches the Lake across the length and breadth of its surface so every portion of the surface is a potential incubator for algae. However, the algae are limited by the uneven distribution of the necessary nutrients for growth; some rivers carry more and some less. Those that carry more are diluted once they mix with those that carry less.

Nowadays too many of nature’s riches end up in the Lake, leading to excessive algae blooms.  Nutrient inputs from human sources far exceed those from natural sources, and include discharge from wastewater treatment plants, runoff from parking lots and roads, deposition from livestock, and leaching of excess fertilizer. The ongoing goal in protecting the health of Lake Champlain is to keep the land’s wealth out of the water and close to where it began on the land.