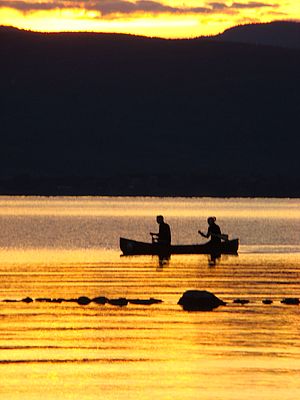 As autumn progresses the lake gives back the warmth it had collected over the summer. Photo by Jay Kiley

Sometime in November or December those who spend time on the lake in quiet contemplation might notice the normally clear water becomes murky, despite the absence of rain. A stale rotten smell may fill the air, even though the summer's algae blooms are long since passed. Lake Champlain will be in the midst of one of its twice yearly mixings. The mixing, also called turnover, occurs because, the water column in a given section of the Lake is of uniform temperature for the first time since spring.

During the summer months the Lake is layered, less dense and warm above, more dense and cool below with a sharp transition, a thermocline, somewhere in the middle. So long as the upper warm layer absorbs heat the temperature and density differences between the layers is accentuated. In addition to temperature differences, the cool bottom layer has less oxygen. Fish and other creatures take oxygen from the water and, because this layer is trapped below the warm layer above and not in contact with the air, the supply is never replenished.

As autumn progresses the lake gives back the warmth it had collected over the summer. The water temperature becomes uniform from top to bottom, and the deep cold water returns to the surface to replenish lost oxygen. Return of deoxygenated water to the surface causes the stale rotten smell. This mixing of deep and shallow layers happens at different times in different parts of the lake - earliest in shallower sections and later in the deepest portions. Resurrection of the stagnant bottom waters is driven by wind and an increase in the density of the surface water. As the surface water surrenders its heat, the molecules pack closer together and begin to fall, much like cream will when added to a cup of coffee. Wind accelerates the process like a spoon stirring the coffee. Sediments in the Lake may be temporarily re-suspended, like grounds in coffee, causing the murky appearance of the water.

Once the lake freezes over, it is again layered, this time with colder water (ice) over warmer water. Cold over warm layering persists until spring ice-out when a second seasonal mixing occurs. Surface water absorbs heat until it is warmer than 4o C and summer warm over cold layering is reestablished until late autumn or early winter.