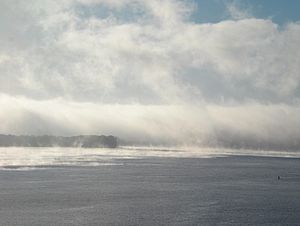 Throughout cold autumn evenings, the layer of air closest to the Lake Champlain’s water accumulates moisture and warmth. The moisture condenses and a thick steam fog forms with colder air masses generating thicker fogs. As the strengthening sun continues to warm the air, wisps of cloud flow upward, revealing the air’s convection currents. A layer of fluffy clouds hovers, seemingly suspended between the water and the otherwise azure blue sky. These clouds mark the border between the lake-warmed water and the cold air mass above. Eventually, the day’s sun warms all the air and the fog burns off.

On the night of October 11, 1776, what was likely a steam fog played a role in the daring escape of the American fleet from a larger British armada. Benedict Arnold and his hastily assembled squadron had spent much of the day battling the British off of Valcour Island. The Americans had lost two of their ships and another three were gravely damaged. The day had been marked by a northerly wind and during the evening a thick fog settled. Knowing that his fleet would not survive another day of fighting Arnold and his men sought escape. They muffled their oarlocks with shirts and snuck right past the British ships, hidden by the dark and fog. When the British commander Guy Carleton awoke on the morning of October 12, he was mortified to find his enemy had escaped undetected.

Steam fog differs in formation from the patchy valley fog frequently referred to in weather reports. Valley fog forms on clear calm nights when the surface of the earth cools through the night and warmer air above it comes closer and closer to its dew point until it condenses. Cold air falling into the valleys from surrounding mountains can maintain this type of fog and cause it to become extremely thick. Shading from mountains inhibits the sun’s ability to burn off valley fog.