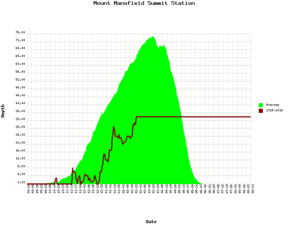 The region’s snow pack is well below normal – what’s that mean for animals? Graph from UVM Empact.

The absence of snow cover in such a mild winter means the insulating value of the snow is also lost.  Air gets trapped between the snow particles and can barely move, reducing heat transfer. On average, snow is about as good at insulating as wood. Light fluffy snow serves as a better insulator than wet heavy snow because it traps more air.

Many animals depend on the relatively warm protected environment beneath the snow pack for protection from cold nights and hungry predators. For hibernating animals like porcupines, the snow keeps winter lairs warmer. Active animals like voles and shrews can forage for seeds and nuts while being shielded from owls and foxes. Ruffed grouse dive into snow in the evening to make temporary homes; lack of snow leaves them more susceptible to freezing on cold nights. Wood frogs actually freeze and thaw through the winter while hibernating under leaf litter, but the more often they have to do so the greater the risk of harm. Snow insulates and maintains a more constant ground temperature.

Snow and ice can also insulate lake water from additional cooling. Water is at its most dense at about 39 degrees F, but doesn’t freeze until it reaches 32 degrees F. Once the densest water sinks to the bottom, the remaining water column continues to chill until an ice layer forms. The ice then prevents further cooling. This winter the lake water is still at a relatively warm 35 degrees F, so excess cooling due to a lack of ice cover is unlikely.