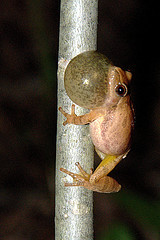 A Spring Peeper at night. Photo by Norm Walsh.

On warm wet evenings from mid-March through April you can often find salamanders and woodland frogs creeping over the still cold ground. They travel from the woods where they hibernated to vernal pools and swamps where they will breed. In prime habitat multiple species of salamanders can be found: Jefferson, blue-spotted, yellow-spotted, red-backed, four-toed, and Eastern newt. Frog species consist principally of spring peepers and wood frogs, joined later by Eastern toads. The migrations can be observed along any roadsides separating woods and swamp.

Once at their breeding grounds, the frogs and toads begin calling for mates. Their songs come to define the onset of spring. Spring peepers probably have the best known call.  Their clear high peeps have been heard practically year-round, but they are most active between mid-March and June after they migrate from their woodland hibernation hide-outs to vernal pools for mating. Researchers estimate that a single male repeats his call about 4,500 times on any given night. American toads offer another common song. Their high-pitched sweet trill comes from the shores of ponds, lakes, and rivers. Toads begin singing slightly later in the season than peepers.

Frogs and toads that vocalize in the spring time usually produce young that must mature relatively quickly. Peepers and wood frogs rely upon pools that dry up by summer time.  Using temporary habitats helps minimize the number of predators their tadpoles encounter, but means singing must start early and mating commence quickly before the pools disappear. Toads and leopard frogs lay their eggs in more permanent habitats, so they can wait a little longer. Still, their tadpoles mature within one growing season so they need to reach adulthood in time to prepare themselves for the coming winter.  Tadpoles of bullfrogs and green frogs can overwinter for a year (sometimes even two), so these species do not begin calling until much later in the summer.