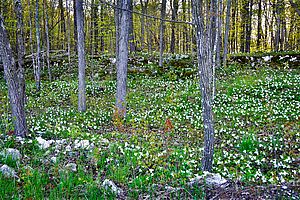 Spring flowers may not rely so much on April rains. Photo by Judith Irven.

April showers bring May flowers, or so the proverb goes. April on average is a wetter month than March, though not as wet as May. As sunlight strengthens in spring the air gets warmer, and there is an abundance of moisture in the form of snow and ice ready to evaporate and fall again as rain. However, it turns out this moisture may not be the most important factor in determining when spring flowers bloom. Flowering time appears to be driven more by temperature than by spring’s moisture. In a 2013 paper researchers looked at first flowering date for plants in Massachusetts and Wisconsin, and found that warm temperatures resulted in earlier flower production. A six degree increase in temperature between the period 1852-1858 and 2004-2012 led to earlier first flowering, from May 14 in the earlier time period to May 4. The very warm spring of 2010, led to first flowering on April 24. A single warm day is not enough to trigger blooms, but a sustained period of warm weather will. Temperature differences would also explain why flowers bloom earlier on south facing slopes. Eventually the weather will get warm enough for the flowers. Snowdrops (Galanthus nivalis) are already peeking out in the Champlain Valley. Spring warmth will come.