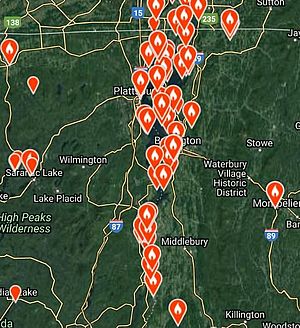 This map shows eBird sightings (a biodiversity-related citizen science project) of common goldeneyes in the Lake Champlain Basin during November of 2019.

Waterfowl add a bright note to frigid winter days. Many birds escape from colder northern climes to the comparative warmth of Lake Champlain. Ducks can be observed on the lake throughout the winter, in open waters or wherever the edge of the ice is. A standout among the various winter fowl are common goldeneyes (Bucephala clangula)—medium-sized diving ducks, with visual and auditory highlights.

Its common name reflects the vibrant amber eyes of both the male and female. The adult male has a striking white and black body, an iridescent green-black head, and a white spot behind its bill. The adult female has a gray-brown body, chestnut brown head, and dark bill with a yellow-tan tip. They are speedy fliers, giving them the nickname “whistler” because of the sound wind makes when blowing through their feathers. Click here to listen to the common goldeneye’s wing whistle and other sounds at the Cornell Lab of Ornithology website.

In winter, flocks of goldeneyes gather in protected bays, where they feed, loaf, and court. Along with other duck species, goldeneyes form pair bonds in winter. According to local writer, educator, and field biologist Bryan Pfeiffer, “One of the male’s signature moves is the ‘head-throw-kick.’ On the water, he thrusts his iridescent green-black head forward for a moment, then whips it back so that his nape touches his rump and his bill points skyward. Finally, he slings his head forward and makes a high buzzy call while splashing water outward with his feet.” In early spring, the bonded pairs of goldeneyes on Lake Champlain will migrate toward breeding waters throughout Canada and Alaska.

If you cross the lake by ferry or stroll along the shoreline this winter, keep your eyes peeled or bring along a pair of binoculars to catch a glimpse of these winter whistlers.