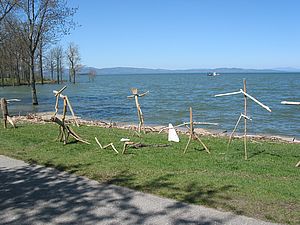 Spring is a great time for finding driftwood on the shores of Lake Champlain. The wood can come from trees along forested shorelines that were undermined by wind and wave erosion, but more commonly it is delivered by streams and rivers entering the lake. Once in the lake, driftwood can remain afloat for long periods of time. In Oregon’s Crater Lake one piece of 9 meter long driftwood known as ‘the Old Man of the Lake’ has been floating around since at least 1896.

Once lodged on shore driftwood can trap wind-blown sand and coarser sediments leading to beach and habitat development. The wood itself can become a home for insects and other invertebrates seeking refuge from predators.

In Norse mythology, the first two humans, Ask and Embla, were originally two pieces of driftwood when the god Odin and his two brothers Vili and Ve encountered them on the beach. Odin gave them life, Vili gave them mind and Ve gave them the ability to hear, see, and speak. So, watch for driftwood this spring . . .it may be your distant cousin!