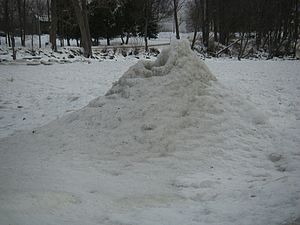 An ice volcano in the Lake Champlain Islands. Photo by Gary Kjelleren.

While skating along the flat clear ice of Mallets Bay four or five years ago, Jamie Leopold noticed a geyser of water shooting straight up into the air – 30 to 50 feet high. He may have witnessed a particularly large ice volcano. Ice volcanos form along the shores of lakes near the ice front. On windy days waves crashing at the front and freezing create a raised rim. Irregularities along the edge can concentrate waves and direct return water flow and spray patterns. Waves spurt through any cracks or holes in the ice sheet. The water molecules freeze as they land and a cone begins to form. As more water spurts through the cone it continues to grow.

Ice volcanoes are most likely to form in shallow areas. This includes near-shore areas but also areas around sand bars or rock ledges. As the base of the wave touches the bottom of the lake, the wave height grows above a level water surface, allowing the geyser-like ejection of water through holes in the ice sheet. For the volcanoes to form, water must be driven by fairly strong winds. Additionally, the air needs to be cold enough to freeze water coming through, or else the warm water melts the volcano cones.

The Wisconsin Department of Natural Resources posted a great video of some active ice volcanoes on Green Bay last winter.