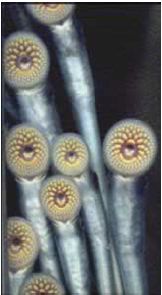 Jawless sea lamprey spend up to seven years in rivers as filter-feeding young. Photo by USGS.

Sea lamprey, best known for their parasitism on salmonids, are among the most primitive organisms with backbones. They belong to a relic group of jawless fish called Agnathans. Their basic body structure evolved much earlier than most other vertebrates. The key clue to their early origins is the lack of a jaw. The evolution of a jaw was a major event in vertebrate development. It greatly expanded the means by which food could be obtained and manipulated and allowed organisms to better defend themselves.

Sea lampreys, due to their more limited feeding strategies, either filter particles out of water when young or parasitize fish. As young, the animals reside in bottom sediments and filter pollen, algae, and other organic matter. Feeding adults attach to fish with their sucker-like mouth, rasp a hole in the side of the prey, and drain their bodily fluids. Trout and salmon are the preferred prey because their soft bodies are easier to penetrate than fish with scaly bodies such as bass.

The sea lamprey life cycle is fascinating. Individuals survive for four to seven years, though they spend only their final year as parasites. Adults move into streams in the spring to mate and lay eggs. At this time they are no longer capable of feeding. Upon arrival at spawning grounds they use their mouths to aggregate small stones into nests, and each female lays tens of thousands of eggs, only a small percentage of which hatch. Once the blind larvae, called ammocoetes, hatch they drift downstream into quiet reaches where they can burrow into sediments and filter feed. They spend three to six years in this stage. At some point, the larvae begin to transform to parasitic adults, growing eyes and developing a new digestive track and mouth parts. They then move to the lake where they spend 12 to 20 months feeding on other fish, before returning to spawn. They do not seem to have fidelity to their stream of origin.

Continuous chemical control of sea-lamprey on Lake Champlain has been on-going since 2002. Chemical control focuses on the larval stage. Sea lamprey are sedentary during this period and multiple years of young can be targeted with a single treatment and streams can be left alone between treatments. Once parasitic adults get to the lake there are no feasible control options.

There have been some attempts to prevent lamprey from returning to their spawning streams. In Malletts Creek there is regular trapping of returning lamprey during the spawning season. This past year a variable crest removable dam was employed on Morpion Stream in Quebec. The dam is taken out after the spawning season to maintain river flows at other times of year.

Sea lamprey are currently considered native to Lake Champlain, though their status is still debated. Three genetic studies provided evidence to support the position that they came into the lake at the time it was a salt water sea about 10,000 years ago. Habitat degradation, water pollution, and dams may have kept lamprey numbers low. Stocking of their favorite food combined with improvements in water quality since the region's forests were cleared probably helped the species.