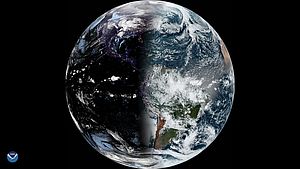 The Vernal Equinox on March 19, 2020. Photo courtesy of the National Oceanic and Atmospheric Administration (NOAA).

As we turn our faces toward the sun to soak up the rays of longer days, the natural world is adjusting too. A period of transition for humans, plants, wildlife, and Lake Champlain, the Vernal (Spring) Equinox, took place on March 19, 2020. Signs of spring surface: the hairs of pussy willows trap sunlight to warm yet-to-emerge flowers, northbound hooded mergansers arrive on open water, and the lake begins to absorb more heat energy, due to the higher angle of the sun above the horizon.

Water has an immense ability to hold heat, which is why the lake’s periods of highest and lowest temperatures don’t coincide with the highest and lowest spans of available sunlight. Lake Champlain receives the least amount of light during the Winter Solstice (which was December 21 in 2019), yet has the lowest level of heat energy at the end of February or early March. Between December and the end of winter, the lake loses more energy to cold and night than it gains from sunlight. The lake receives the most amount of light during the Summer Solstice (June 20 in 2020), but has the most heat energy in early August because it soaks up sunlight during long summer days.

The change in heat and light through a season impacts the composition of algae and cyanobacteria in the water column. It is common to have an influx of diatoms, a group of single-celled algae, in early spring; they respond to an increase in light levels and nutrient abundance. Diatom blooms have been observed when lakes are still covered in ice! In contrast, cyanobacteria are more competitive at higher temperatures, so they dominate in late summer.

Light and heat are critical factors in the physical and biological processes that govern Lake Champlain. Without these forces, the exchange of energy and materials within and around the lake would be static.

Interested in exploring other seasonal shifts on Lake Champlain, such as summer stratification and autumn mixing? Take an in-depth tour of the lake through LCC’s book Lake Champlain: A Natural History.