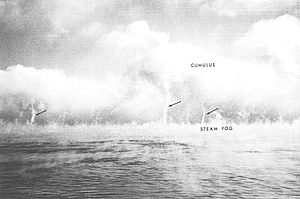 Steam devils on Lake Michigan, from the paper which first named and reported the phenomenon. Photo by Wikipedia.org.

Early winter is the best time to look for steam devils on Lake Champlain. These weak whirlwinds over water develop when cold air moves in over the still relatively warm waters of the lake. First fog develops over the water, then wisps begin to spiral and become taller and tighter. They can reach up to hundreds of feet into the air, like small tornadoes.

Steam devils form when wind creates a pressure differential between the water and the air above. Pockets of low-pressure air sometimes develop in the upper layer. Steam flows into these pockets as the wind rotates it and the column becomes stretched. More warm air flows in at the base of the spiral continuing to fuel the steam devil. As the air rises, it cools and displaces other cool air which streams down the outside of the funnel stabilizing it and squeezing the column of rising air. The fog begins to rotate faster and faster, like an ice skater pulling her arms in during a tight spin. Warm air at the base is eventually displaced by cool air flowing downward, and the system loses stability and collapses. Thus steam devils are short-lived, lasting only minutes at best.

Though steam devils have been around forever, the first scientific paper describing them came out in 1972 following observations of the phenomena on Lake Michigan. As winter progresses and more of the lake freezes, steam devils become less common. However, so long as there is open water, the phenomena might be seen when the coldest weather enters the region. If you happen to capture a Lake Champlain steam devil on film, please share your picture with LCC at lcc@lakechamplaincommittee.org!