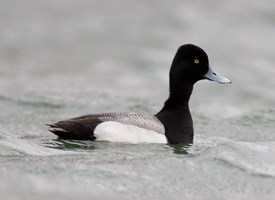 The lesser scaup is one of the most abundant and widespread of the diving ducks in North America. Photo by Christopher L. Wood via Flickr.

Winter is a great time for observing waterfowl on Lake Champlain. During the chilly months many birds escape from even colder northern climes to the relative warmth and tranquility of Lake Champlain. Ducks can be found wherever the edge of the ice is.

Common goldeneye are usually the most prevalent winter ducks on the lake. Goldeneye or whistlers are chunky diving ducks with graceful plumage - white bodies and dark wings and head with just a spot of white at the chin. In winter, great flocks gather in protected bays feeding and loafing. On toward spring one can observe males’ mating display where they snap their heads onto their back as if they had just come unhinged. Large flocks of common goldeneye may host a rare Barrow’s goldeneye. This bird usually has a more western range but each winter a few are reported from Lake Champlain. They have less white in their face and their backs are blacker than common goldeneye.

Rafts of scaup sometimes show up near the Champlain Bridge. In breeding plummage these birds have a handsome two-toned look, white below and black above. The greater scaup is slightly larger than the lesser scaup, but the key distinguishing feature between the two species is the shape of their head: smoothly rounded in greater, and with a small bump on the back in lesser. Mixed flocks of greater and lesser scaup may contain a hidden tufted duck -- a European species with a tuft of feathers off its head. Ring-necked ducks also resemble scaup but have a small white ‘comma’ projecting from the white belly feathers into the dark feathers near their back and chest. Other unusual winter vagrants may include redhead, canvasback, and long-tailed duck.