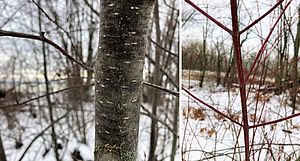 Plant identification is not restricted to a particular season. Though woody plants can be difficult to identify in winter, the activity adds a new dynamic to winter adventures and is a fun challenge. Read on for identification tips about two common wetland shrub species, speckled alder (Alnus incana) and red-osier dogwood (Swida sericea), along with their value and role in wetland ecology. A shrub is a woody plant with several stems growing from the base (it generally lacks a tree-like form) and is typically shorter than 18 feet.

Speckled alder is a shrub in the birch family, so it’s related to the trees paper birch and yellow birch, as well as the shrub American hazelnut. It grows on the shores of rivers and lakes, in swamps, and on the edges of wetlands. “Speckled” alder refers to the pores distributed across the protective outer bark of this shrub’s stems; in botany, these pores are referred to as lenticels. Lenticels enable gas exchange between the living tissues of the inner bark and the air from the surrounding environment. The bark is smooth and green-gray, brown-gray, or red-brown in color. The winter buds are short-stalked—imagine a pedestal—and maroon. An olfactory surprise awaits beneath the bark: snap a twig and you’ll smell a hint of wintergreen. If you break a twig, take a look at the pith, the central part of the stem, too—it’s triangular in cross-section.

Red-osier dogwood’s ruby red twigs contrast against winter whites. It’s found on the edges of fields and streams and in wet areas. The shrub typically grows between four and eight feet tall. Run your fingers along the bark and it will feel smooth and unbroken. The buds are opposite in positioning (not alternate) and are covered in dense, short hairs. If you’re unsure about the identification of this shrub from its exterior characteristics alone, snap a twig and look at the cross-section. The pith of red-osier dogwood is white.

Rivers flow year-round. An unstable and eroding bank doesn’t take the winter off; sediment can be transported downstream, regardless of the season. Both speckled alder and red-osier dogwood play significant roles in stabilizing streambanks and revegetating wetlands. They form dense thickets that control erosion. The shrubs are important to winter wildlife too. Speckled alder is coveted by beavers—active creatures in the wintertime—who eat the bark and use the stems to build lodges and dams. Red-osier dogwood’s fleshy white fruits are rot-resistant and therefore persist long after the fruits of other species have fallen, providing an important food source for birds and mammals.