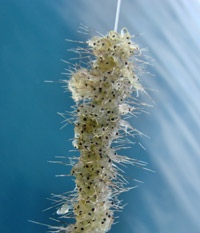 The fishhook waterflea, a small invasive crustacean, is an aggressive predator of native zooplankton and known to foul fishing lines and gear. Photo by Minnesota Sea Grant.

The fishhook waterflea is about one centimeter long, including its distinctive “fish hook”, a long spiny tail with a loop at the end. The tails can tangle in fishing lines and with one another, bringing fleas together into clumps that look and feel like wet cotton. Fishhook waterfleas can have a negative impact on biodiversity, should their populations grow large enough to cause a decline of native zooplankton species that they prey upon. This decline would in turn impact the small (or juvenile) fish that feed on zooplankton, and the larger fish that feed on these smaller species.

Fishhook waterfleas can reproduce several times in a season. In addition to sexual reproduction, the females of the species are able to reproduce parthenogenically, which is a form of asexual reproduction where they grow clones of themselves in brood sacs. In the fall the fishhook waterflea lays resting eggs in the lake sediment, which are able to overwinter our region’s low temperatures in order to hatch the next summer. Population densities are therefore highest late in the season, so it’s not a surprise that the fishhook waterflea was not detected in earlier samples taken in June.

The fishhook waterflea is similar in many ways to the spiny waterflea, another invasive zooplankton that was discovered in the lake in 2014 (<link learn news item spiny-water-flea-have-arrived-what-next _blank>Click here to read LCC’s 2014 article about that discovery). Both are known to foul fishing lines and nets, and both prey on native zooplankton.

Native to Eurasia, this invasive waterflea came to the United States in the 1980s, where it was carried into the Great Lakes region in ballast water. Before its discovery in Lake Champlain, the closest known populations were in Lake Ontario and the New York Finger Lakes. It was likely transported from there in a boat or on recreational equipment.

Fishhook waterflea, like many aquatic invasive species, are invisible to the naked eye at certain life stages. It’s imperative to be aware of their presence in a waterway, and be diligent about preventing their spread. Follow these tips to avoid transporting them:

The Lake Champlain Basin Aquatic Invasive Species Rapid Response Task Force, which LCC helped form, is currently assessing the potential impacts of the fishhook waterflea and evaluating management options. There are no known control technologies to eliminate either the fishhook or spiny waterflea once they are established in a water body. Efforts will focus on preventing the spread of this species to other bodies of water in the region.