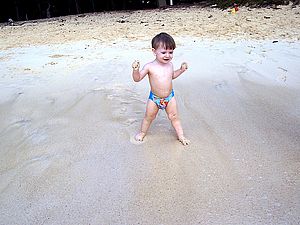 A dirty diaper can close a beach. Photo by Kevin Lawver.

Last July the manager of Sand Bar State Park in Milton, Vermont received a call that would greatly affect his summer. Someone whose family had visited on July 1, 2012 reported that two children who had been swimming later became ill. That alone wasn’t a big deal; kids get sick all the time from any number of causes. When a second report came in a few days later, this time four children from one family all of whom had also been swimming on July 1st, it became much more worrisome. By the afternoon of July 6th the media began calling and the park had itself a crisis. Reports of illness continued to accumulate over the next 17 days and the Department of Health got involved. The park closed on July 17th and would remain closed for three days while health officials searched for the culprit. What they found provides an interesting glimpse about both real and perceived risks of swimming in public areas.

The closing of the park elicited wild speculation. Some assumed it was evidence of wide spread pollution problems in the lake. Others blamed the problem on causes as widespread as formaldehyde or "Canadians dumping their boat toilets in the lake".

Specific symptoms of the illness helped narrow the potential causes. Eventually 35 people who swam at the park between July 1 and 15 would report getting sick with similar symptoms. Victims had nausea, vomiting, diarrhea, fever, and abdominal cramps. Symptoms set in between 24 and 36 hours after swimming, a relatively short latency period. Lack of blood in the diarrhea eliminated certain stomach pathogens. Other family members got sick after the initial cases suggesting a viral or bacterial agent rather than algae toxins or chemical agents. Altogether these symptoms pointed to a norovirus as the causative agent.

Noroviruses are highly infectious agents that can be transmitted via person to person contact, contaminated food or water, or when aerosolized particles land on surfaces. The Centers for Disease Control and Prevention (CDC) say norovirus alone causes 21 million illnesses annually. A mere 100 viral particles can bring on infection, compared for example to 1 billion Salmonella needed to reach infection levels. Noroviruses can survive on hard surfaces for 12 hours and on soft surfaces like carpets for up to 12 days. Victims continue to shed viruses for up to two weeks after symptoms have ceased. Outbreaks have been associated with contamination of freshwater, saltwater and even swimming pools. They have gained a degree of fame for infecting cruise ships, where the CDC documented 16 such outbreaks in 2012 and seven so far in 2013.

The situation last year at Sandbar should not scare swimmers away from the lake as waterborne illnesses are widespread and can happen anywhere. Rivers that are tested for E. coli routinely have higher readings than Lake Champlain. A recent study of public pools in Georgia found 58% contained fecal contamination.

The Department of Health was not able to confirm norovirus as the causative agent at Sandbar State Park. They couldn’t sample immediately because they had to borrow specialized sampling equipment in order to look for the virus in the water. The viruses are much smaller than bacteria. Two samples were taken on July 18th and results for norovirus were negative.

The original source of the outbreak is unknown. It may have come from an infected individual swimming or using one of the restrooms. Perhaps a child had a loose diaper and went swimming. Beach managers frequently report parents changing diapers on picnic tables, washing them in the water, or leaving dirty diapers on the beach.

The park has made some changes as a result of last year’s outbreak. They are remodeling the restrooms to ensure they provide a comfortable place for changing diapers. They offer swim diapers for patrons that may not have brought them. Some changes are still being debated. They are reconsidering their “carry in, carry out” trash policy with the thought that parents might be less reluctant to change diapers if they don’t have to carry the old ones out.  Additionally, the Department of Health now has the equipment necessary to sample noroviruses so they can detect them quicker.

As more people congregate in any given area, the risk that one person is sick and potentially contagious increases. That is as true for waterborne illnesses at beaches as it is for the common cold at your workplace. Yet, some of the draw at a public beach is the crowd and energy they bring. To minimize risks of spreading illness we must each take responsibility for ourselves and our families. Individuals need to be responsible for their trash: pack out anything you bring with you, including dirty diapers. The CDC offers the following rather common-sense ways to protect yourself and others: don't swim when you have diarrhea; shower with soap before you start swimming; take bathroom breaks every 60 minutes and make your children do so too; check young children’s diapers every 60 minutes and don’t change them in or near the water; don't swallow the water you swim in; and most importantly wash your hands after using the toilet or changing diapers.