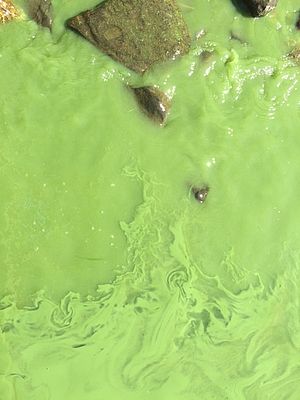 In late December 2017, New York Governor Andrew Cuomo announced a $65 million four-point initiative to aggressively combat harmful algal blooms (HABs) in Upstate New York waters. Twelve lakes that are vulnerable to HABs and are critical drinking water sources and vital tourism drivers were chosen as priority waterbodies. Lake Champlain and Lake George are two of the twelve that will receive greater focus. Lessons learned will be applied to other impacted waterbodies moving forward.

The State's Water Quality Rapid Response Team, co-chaired by New York Dept. of Environmental Conservation (NYS DEC) Commissioner Basil Seggos and Dept. of Health (NYS DOH) Commissioner Howard Zucker, will convene four Regional Summits to bring together national experts with Steering Committees of local stakeholders established for each lake. These groups will collaboratively develop Action Plans to identify contributing factors fueling HABs and the state will provide $500,000 per lake to develop immediate action plans to reduce sources of pollution that spark algal blooms. The state will provide nearly $60 million in grant funding to implement the Action Plans, including new monitoring and treatment technologies. The summit for the North Country will be held at the Best Western in Ticonderoga on March 20 from 6:00 to 8:00 PM.

"Protecting water quality is a top priority and through these actions and funding, we are providing direct assistance to communities to ensure their water resources remain clean," Governor Cuomo said. "This comprehensive program will continue New York's national leadership in responding to the threat of harmful algal blooms and implement new and innovative strategies to safeguard our clean water for future generations."

The initiative will bring together researchers from across the country, including experts from Michigan, North Carolina, Ohio and Vermont, as well as the SUNY College of Environmental Science and Forestry, SUNY Stony Brook Center for Clean Water Technology, the New York State Soil and Water Conservation Committee to share best practices and develop innovative solutions that can be replicated in water bodies across the state.

Increasing Threat
In recent years, the extent, duration, and impacts of HABs have increased. HABs occurrence has been linked to phosphorus and other nutrient inputs and is exacerbated by heavy rain events and warming waters related to climate change. In 2015, NYS DOH documented an estimated 35 HAB-associated illness cases in 16 New York counties, all associated with exposure during recreational activities like swimming and boating.

In 2016, drinking water for more than 40,000 people in Cayuga County was impacted when HABs-related toxins were detected in finished drinking water for the first time. Last year, the State invested more than $2 million to construct state-of-the-art water treatment systems in the city of Auburn and town of Owasco to remove algal toxins from drinking water supplies, and established the Finger Lakes Water Hub to study algal blooms, work with local agencies and researchers, and undertake pollution reduction projects. Additionally, the State granted over $700,000 and expedited permits to Cayuga County for its Owasco Flats Wetlands Restoration initiative, designed to prevent nutrients from flowing into Owasco Lake, to discourage the growth of algal blooms.

In 2017, more than 100 beaches were closed for at least part of the summer due to HABs, and Skaneateles Lake, the source of unfiltered drinking water for several communities including the city of Syracuse, was threatened by algal blooms for the first time. While the finished drinking water was not impacted, the event highlighted the need to better understand the causes and control of HABs.

New York Senator Betty Little said, "Governor Cuomo's inter-agency Drinking Water Rapid Response Team will work to learn from our communities and help to develop action plans that will address HABs in waterbodies across the state. This will help speed up critical projects to reduce the pollution that sparks blooms - a vital step in bolstering tourism, preserving the state's water supply while protecting the health and wellbeing of residents in the North Country and beyond."

The four groups and the twelve lakes are as follows: