Bald eagle – Eighteen pairs nested in Vermont including a new nest in Panton. If reproduction continues as it has the species will be eligible for down-listing to ‘threatened’ in Vermont in 2015.

Common Tern – The second highest number of Lake Champlain pairs, 234, nested on Popasquash and Rock islands but suffered poor reproduction, only 16 fledglings, due to predation by Great Horned Owls, Black-crowned Night Herons and Great Black-backed Gulls. The Vermont down-listing criterion of 200 pairs has been met for the required five years now, but average reproduction is still too low.

Black Tern – As in years past, all nests were in the Missisquoi National Wildlife Refuge, this year at Big Marsh Slough. Ninety-five pairs nested, slightly fewer than in 2013. High water during the breeding season meant nesting habitat was scarce.

The Vermont Fish and Wildlife Board is proposing changes to the regulations for catching sauger, a walleye relative, on Lake Champlain. Under the proposal, any angler who catches a sauger in the lake would have to release it immediately.

Sauger are found in large turbid lakes and lake bottoms of mud, sand, or gravel. Lake Champlain is the only water body in Vermont from where this species has been found. In New York, sauger were historically found in five of the state's 18 watersheds, but appear to have disappeared from four of them. During the 1960s they were reported as common in southern Lake Champlain but numbers have declined since then. The New York Department of Environmental Conservation (NY DEC) reports only two fish collected from Lake Champlain since 1978.

Sauger look alot like walleye but have black spots on the membrane of the dorsal fin while walleye have solid black. They lack the white tip that the walleye have on their caudal fin.

Where have all the sauger gone? Graphic from Wikipedia.

The Henry Sheldon Museum in Middlebury recently inaugurated a new exhibit on trapping boats of the Lake Champlain Basin. The project is a collaboration with Patricia A. Hannaford Career Center, and will run from March 10 through April 11. For the exhibit, 13 high school students researched the traditions of trapping and boat building in the region. Under the tutelage of boat-builder and LCC member Douglas Brooks the students conducted interviews with trappers, measured historic trapping boats, built replica boats, and produced detailed drawings to document the history of these small watercraft. A student-built replica of a trapping boat will along with an historic boat from Addison County will be displayed along with traps, a push pole, stretching boards for pelts, historic photographs, and excerpts from the interviews.

A Cornell University survey to assess New Yorkers’ awareness of invasive species found the highest awareness level in the Adirondack/St. Lawrence/Eastern Lake Ontario region. Forty-nine percent of respondents knew something about invasive species compared to 34 percent statewide. The most widely known invasive species by name were water chestnut and wild pigs. Awareness is likely tied to familiarity as high numbers of respondents from the North Country knew zebra mussels, a now common species, but fewer had heard of hydrilla, a species just moving into the state. The group plans a follow-up survey to provide more detail about people’s level of concern about invasive species, behaviors they currently engage in that may help prevent the spread of invasives, and New Yorkers’ willingness to take additional preventive actions.

Do you recognize this plant? Photo from NEANS.

New York State Comptroller Thomas Napoli recently released a report documenting the significant staff cuts and constrained funding that have plagued the Department of Environmental Conservation (NY DEC) over the last decade. When adjusted for inflation, NY DEC funding increased by only 1.7 percent between 2003 and 2014. State funding has actually fallen by over 15 percent with federal funding filling the gap; an approach that may become more difficult given the new Congress in Washington. NY DEC's workforce has been reduced by 10.4 percent, while their workload has increased with a number of new programs. Two major sources of revenue for NY DEC, the Environmental Protection Fund and the Hazardous Waste Oversight and Assistance Account, have been raided for over a half billion dollars to provide general fund support. The pitiful financial state of NY DEC has been long in building and makes it difficult for the dedicated staff to fulfill their many obligations to protect New York’s environment. Thanks to Adirondack Almanack for this information. 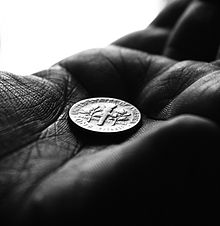 Buddy can you spare a dime? Photo from Wikipedia.

Clean-up of Toxics in Saranac Lake

When the Saranac Lake Gas Co. abandoned operations in the 1940s they left behind a legacy of toxic waste on their property and in nearby Brandy Brook and Lake Flower's Pontiac Bay. The plant used coal to manufacture lighting gas for the village and was one of hundreds that operated across the state from the late 1800s to the mid 1900s. Manufactured gas was produced by heating combustible materials, usually coal, but sometimes wood or oil, in enclosed ovens. Gases were volatilized and then recaptured for use as fuel. Waste products from the process contained a mix of toxic chemicals.

The Saranac Lake Gas Company site is one of hundreds of former manufactured gas plant sites across the state that the New York Department of Environmental Conservation (NY DEC) has investigated for contamination. Roughly 300 of them are in need of remediation. Most New York towns with populations of more than 5,000 had at least one gas plant. The plants required large quantities of water to operate so were usually located on shorelines.

Earlier this month NY DEC announced a $9.3 million plan to clean up the Pontiac Bay site. They propose hiring outside contractors to dig seven feet into the lake bed and clear 76,000 square feet of waste-laden sediment at the state Superfund site. Written comments on their proposed clean-up plan will be accepted until March 22.

Dredging on tap for coal tar in Lake Flower. Photo from Wikipedia.

Researchers at UVM have for the first time documented background rates of erosion in the absence of land clearing and then compared their results to erosion rates following land clearing. The researchers studied sediments from rivers along the southern Appalachians. They compared the amounts of a rare isotope Beryllium-10 from different age sediments. The longer a sediment stayed on land, the more Beryllium-10 it would accumulate. They found that prior to European settlement, about one inch of soil would be lost every 2,500 years. During the period of peak land disturbance during the late 1800s and early 1900s, rates spiked to an inch every 25 years. Researchers suggest that the background erosion rates can be used to set targets for resource conservation programs.

At the federal level, on February 24 the U.S. House passed a bill (H. 212) that would give EPA 90 days to develop and submit a plan to Congress to assess and manage risks from algal toxins in drinking water. All House members from the Champlain watershed voted in favor of the bill. EPA would need to compile a list of toxins and their effects, suggest treatment options, and provide technical assistance to states. The bill is an amendment to the Safe Drinking Water Act and does not include any funding. The bill is a response to last summer's incident in Toledo, OH where an algae bloom over the city’s water intake left a half-million people without drinking water. A companion bill (S. 460) in the Senate currently sits in the Committee on Environment and Public Works. Senators Gillibrand of NY and Sanders of VT are both members of that committee.

When waters rise they have to go somewhere and everyone hopes it’s not on their own land. Flood problems are particularly acute along the Mississippi River where levees, locks, reservoirs and dikes have been constructed to try and direct flood waters from one area to another. The New Madrid Floodway Project in eastern Missouri on the western shore of the Mississippi was designed to protect valuable agricultural lands where millions of dollars in soybean, corn, cotton and rice are produced each year. During major floods, excess water from the river is directed toward these farmlands, but the U.S. Army Corps of Engineers has proposed protecting the crops. This concerns residents of Cairo, Illinois on the eastern shore. They worry that any water that doesn’t get into the farm fields will end up in their downtown as it almost did during the 2011 flood. Environmental groups are siding with Cairo in fighting the proposed project, saying it would lead to destruction of valuable wetlands.

Protecting farmland from flooding can endanger cities and wetlands. Photo from NWS.

The AralSea in central Asia was once the fourth largest lake in the world with a surface area of 26,000 square miles. Now, the water body has shrunk to one-tenth its original size and 82 percent of what was water is desert. Salinity has increased dramatically in what has been described as one of the worst man-made environmental disasters in recorded history. The eastern basin completely dried this past summer. Coastlines now sit miles from former waterfront towns. The Sea began to shrink in the 1960s when Soviet engineers built an enormous irrigation system for the agricultural fields of Kazakhstan and Uzbekistan. The demands of agriculture for irrigation trumped concerns for the waterbody's ecological health. The smaller North Aral Sea has been seeing some improvement since the World Bank funded construction of a dam in 2005 that traps enough water so that more water flows in than evaporates. On the negative side, the dam keeps water from reaching the larger Southern Aral, exacerbating problems there.