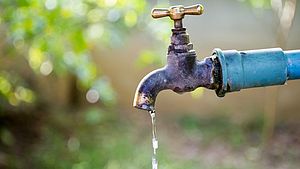 Too many leaks! Image from Grist Magazine.

President Obama’s latest federal budget presents a good news, terrible news situation for water projects around the country. The good news is an increase of $158 million for drinking water projects. This comes in the wake of the crisis in Flint, Michigan that resulted in high lead levels in drinking water throughout the City. The terrible news is that the increase in drinking water funding is more than offset by a proposed cut of $370 million for clean water projects like sewer pipes, wastewater facilities and reducing stormwater pollution.  All told, the federal government has reduced its investment in water infrastructure by 80 percent since 1980.

While the increase for drinking water is welcome, the money won’t go very far; the situation in Flint alone is likely to cost up to $1 billion to fix. The U.S. Conference of Mayors estimates national infrastructure needs of $2.8 to $4.8 trillion, at a time when our existing water infrastructure earned a D rating from the American Society of Civil Engineers.

Older communities with aging infrastructure and declining tax revenue are most vulnerable to failing infrastructure according to an article in Slate Magazine. In Flint, where over 40% of the population lives in poverty, the lead crisis arose when the city sought out a new source of water in order to save money, and then did not properly adjust their corrosion treatment, another step that would have cost money. New developments aren’t likely to have lead pipes, but Congress didn’t ban lead in pipes until 1986. Before that, some building codes even required lead piping. The article concludes “Without greater investment from federal or state governments or innovative regional solutions, it’s a safe bet that Flint won’t be the last city that suffers an avoidable disaster of failed infrastructure.”