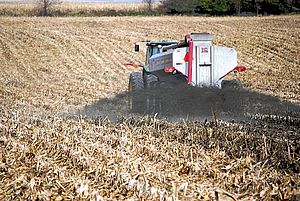 When are accepted agricultural practices not enough? Photo by Wikipedia.org.

Should farmers who own land with greater potential to pollute Lake Champlain be held to a higher standard than those that own less vulnerable land? LCC agrees with a Conservation Law Foundation petition submitted to the Vermont Agency of Agriculture saying they should. We filed comments earlier this month urging the Agency to require greater regulatory controls for agriculture. While many farmers have implemented practices to reduce pollution and soil erosion, we can't depend on voluntary actions, especially in areas like Missisquoi Bay where water quality is already compromised.

The petition revolves around a study released in 2011 by Stone Environmental to identify critical source areas of phosphorus pollution in the Missisquoi Bay watershed. More phosphorus flows into Missisquoi Bay annually than any other lake segment. The bay itself is very shallow (only 14 feet deep at its greatest depth) and unable to absorb the pollutant. The critical source area project attempted to identify the subset of lands in the watershed that contributed the most pollution.

Critical source areas combine a phosphorus source (from soil type or management) with a landscape position that allows the pollution to be delivered to waterways. The landscape position may include hilly terrain where water runs off quickly, proximity to the water, or some combination of factors.

The three most important factors in determining critical source areas were the land's slope, the soil type, and the likelihood that given soils would become saturated. These factors are not independent of one another. In particular, the likelihood of soil saturation is dependent upon both slope and soil type. Steep slopes and soils that prevent water infiltration such as clays are the most likely to generate phosphorus run-off.

According to the Stone model, 30% of the land in the Missisquoi Bay watershed accounts for 82% of the phosphorus load. A mere 10% of the land accounts for over 57% of the load. Most of the critical source areas were on agricultural lands. In all, the model suggested 64% of the total load came from agricultural lands with land in hay-corn rotation contributing 29% of the total. It is important to note that these pollution loads were not a reflection on putatively good or bad agricultural management; after all the model had to apply a single land-use when in reality farmers rotate crops. Instead, the mere presence of a hay-corn rotation on certain soils with certain slopes generated the load.

The CLF petition calls on the Agency of Agriculture to require best management practices, standards above the base requirements for farmlands identified as critical source areas. Best management practices might include cover cropping, wider riparian buffers, incorporation of manure into the soil, or conservation tillage. An important caveat is that the critical source areas should be delineated with “subsequent on-the-ground investigations” as the model of such magnitude required certain assumptions that may not reflect what is really happening. The field visits would also allow agricultural professionals to work with farmers to identify which best management practices are appropriate for a given farm.

Many farmers have already applied best management practices. The Agency of Agriculture and the Natural Resources Conservation Service have been targeting outreach efforts to farmers with land in critical source areas since the study was completed.

We support those efforts but want them further reinforced by regulatory requirements. There will always be recalcitrant individuals that are not interested in any measures beyond what is required. There should be no excuses for these holdouts not to apply best management practices. Businesses that are subject to stormwater management regulations already need to provide different types of solutions for different locations based on soils and slopes; farmers should not be exempted from such heightened scrutiny.