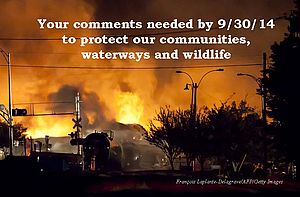 Don’t let the next accident happen in our backyards.

Below is further information on the issue and guidance on how you can weigh in on two upcoming decisions that will affect the safety of our communities and waterways.

Please file comments by 9/30/14 with both the New York Department of Environmental Conservation and the federal Department of Transportation.Thanks for getting involved!

- Each week between 15 and 30 million gallons of Bakken crude oil travel along Lake Champlain's New York shoreline carried by five to nine trains with up to 100 cars each (train volume reported by Canadian Pacific).

- Oil from the Bakken fields of North Dakota is much more flammable than oil from other sources and has been implicated in numerous rail car explosions.

- Rail tracks sit right on Lake Champlain between the Saranac River and the Air Force Base in Plattsburgh, from the mouth of the Ausable River to south of Willsboro Bay, and from Port Henry south to Whitehall. The tracks also cross the Saranac, Ausable, and Boquet Rivers.

- Emergency preparedness for an oil spill in Lake Champlain is weak. The emergency response plan for the Lake Champlain region has not been updated to reflect the dramatic increase in oil train traffic. State and federal agencies say they will revise the plan by the end of this year, but there is no legal mandate to do so.

- Most oil spilled in water is never recovered through clean-up. Impacts on aquatic organisms can linger for decades.

- Rail cars called DOT-111s account for 69 percent of the U.S. oil-by-rail fleet and 80 percent of the Canadian fleet. They are not designed for hauling explosive liquids and are prone to puncture and leakage even in low-speed accidents. These failures were identified in a 1991 safety study but have still not been addressed.

- Canada’s transport minister called for the phase out DOT-111s over the next few years and ordered 5,000 of the most dangerous cars off the rails. In late July, The US Department of Transportation (DOT) proposed a gradual phase-out of DOT-111s for hauling bakken crude, but the process will take several years. In the interim, DOT projects that several more major accidents could occur.

Prevent Tar Sands From Being Transported Through Our Communities

Global Partners, an oil shipping company, has submitted plans for an oil heating facility in Albany that would allow shipment of Canadian tar sands oil. Tar sands would travel by train to Albany, and down the Hudson river by barge to East Coast refineries. Tar sands oil is viscous and dense; it sinks to the bottom when spilled in water. Most clean-up efforts of heavy crude recover 10-20 percent, at best. The rest stays in the environment.  The New York Department of Environmental Conservation (NY DEC) is currently accepting comments on the plan for a heating facility for heavy crude at Albany. Tell NY DEC that any expansion at Global’s terminal should undergo a full environmental impact review that includes analysis of impacts of oil transport via rail throughout the region including along Lake Champlain.

Every day, thousands of tank cars loaded with dangerous crude oil are traversing America's railroads, putting communities, waterways and wildlife at risk of fiery derailments and destructive oil spills. More than 20 years ago, transportation safety regulators recognized that the majority of tank cars in use, called "DOT 111s," were unsafe. Yet, in the last six years the amount of crude oil moved by rail has escalated 6000 percent, and the DOT 111s are still on the tracks. A fracking boom in North Dakota and central Canada is the source of this volatile "Bakken" crude. In the last year there have been several disastrous accidents, and more crude oil spilled from trains last year than in the previous 40 years combined. Federal regulators are finally proposing to phase-out the DOT 111s from use in Bakken crude shipping, but the proposed change will take years. A multi-year phase-out of these tank cars poses an ongoing and unacceptable risk to human life, community safety, emergency responders, and our environment.

Please join us in asking the Department of Transportation to issue an Emergency Order to prohibit transport of American or Canadian Bakken crude or tar sands oil in DOT 111 tank cars. This is the only action that appreciably and immediately will reduce the risk of fiery derailments and harmful crude oil spills associated with train accidents. Also contact your Congressional representatives to advocate for the ban.

Comments must be received by 9/30/14
To be accepted, all comments must include the Department of Transportation Agency name and Docket No. PHMSA-2012-0082 (HM-251 at the beginning of the comment.

Contact your federal representatives and ask them to ban use of DOT-111s for oil transport.