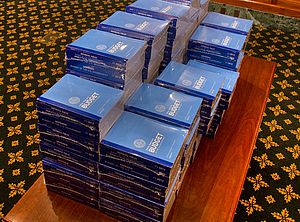 White House budget is an attack on the environment. Photo by New York Times.

The White House is proposing to slash the Environmental Protection Agency's (EPA) budget by 25%. The $2 billion cut from EPA's budget of $8.14 billion represents a mere .05% "savings" in the total federal budget. While the draconian cuts to EPA have little impact on the overall budget they will have a significant effect on the ability of the Agency to carry out its mission to protect human health and the environment. These and other proposed budget cuts threaten environmental safeguards and undermine decades of work to protect the natural resources we depend on for life and livelihood. More than 40% of EPA's budget goes to the states in the form of grants. How might those cuts affect Lake Champlain? A third of the lake clean-up budget (projected to be $2.3 billion over 20 years) is dependent on federal funding. A third of the Vermont Agency of Natural Resources (ANR) annual budget is federally-funded. EPA funds of $9 million pay for one third of Vermont Department of Environmental Conservation (VT DEC) staff. Those funds pay for staff charged with implementing the Clean Air Act, Clean Water Act, Safe Drinking Water Act and the Resource Conservation and Recovery Act --  core environmental programs. Additionally the state gets $20 million annually of EPA funds for the state revolving fund for drinking water and wastewater treatment upgrades. Funding for the Lake Champlain Basin Program -- the entity that coordinates the Lake Champlain restoration plan and supports critical research, monitoring and education programs -- is also targeted for massive reduction or outright elimination.

According to a January 2017 Reuters poll, 61% of Americans want EPA to be "strengthened or expanded" (39%) or "remain the same" (22%). Only 19% of Americans wanted EPA "weakened or eliminated", the rest said they "don't know". The cuts outlined above would decimate the budget of the agency tasked with ensuring clean air and water. It's nothing short of an attack on health and environmental safeguards. Congress has the power to accept or reject the president's budget proposal. Let your Congressional representatives know you expect them to take a strong stance against any proposal that jeopardizes Americans' right to clean air and water. Click here for information on how to contact President Trump and members of Congress.