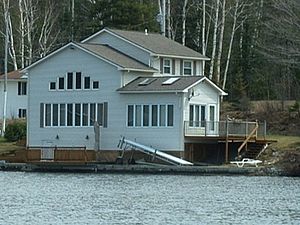 Vermont is the only state in New England with no required lakeshore development review or standard. Consequently, many shoreline residents clear most of the lakeside vegetation.

One of LCC’s top legislative priorities in Montpelier this year has been the passage of a lakeshore protection bill. Currently, any shoreline zoning is left to local communities but only 20% of towns have taken advantage of such opportunities, leaving many of the states waters vulnerable to wanton development. Such a bill was drafted in the House Committee on Fish Wildlife and Water Resources. The committee held a public hearing on the measure on March 12, and amended their proposal as a result. Finally, after 11 versions of the bill the committee voted 8-1 to support it. The final version was weaker in some ways than LCC would like, but represents an important step forward in lake protection. The bill went to the House floor on Wednesday March 27 where it faced some hostile amendments, but these were defeated and the bill passed 105-42. It now proceeds to the Senate.

Ginny Garrison, who served for more than 25 years as chief of Vermont's Lakes and Ponds Management and Protection Section at the VT Department of Environmental Conservation, offers her thoughts on why shoreline regulations are necessary to protect water quality:

"Requiring statewide regulations for land clearing and the creation of impervious surfaces along shorelands is the single most effective step the Vermont Legislature can take to protect Vermont’s lakes. A few years ago I retired after 35 years working on Vermont’s lakes as a biologist for the VTDEC’s Water Quality Division. I have seen first-hand the negative impact that clearing along shorelands and the creation of impervious areas such as roofs and driveways can have on Vermont’s lakes.

Some of the impacts are very obvious – muddy runoff flowing directly into the lake; shoreland banks destabilized so they are easily eroded by waves and high water; beds of aquatic plants and green algae on the lake bottom off of cleared shores. But it is the not-so-obvious impacts that the clearing of shoreland and subsequent creation of impervious areas has had and is continuing to have on Vermont’s lakes that scares me most and makes statewide regulations such a high priority now.

Only recently have biologists begun to measure these less obvious impacts and understand the extent of them. The results of recent research conducted by the VTDEC and others around the country have shown that poor lakeshore habitat is the biggest problem for lakes nationwide, and the biggest problem for Vermont’s lakes, even more of a problem than phosphorus.

Lakeshore property owners care deeply for the lakes they live on and may have a difficult time believing these impacts are occurring. When you see muddy water or algae blooms or dense beds of Eurasian watermilfoil, you know that problems exist. However, it’s harder to see the changes occurring in shallow water habitat, and it’s particularly difficult to notice because the changes are happening parcel-by-parcel over time. But the science now exists that proves the changes are real, and they are significant.

For the past 40 years Vermont has sought to protect lakeshores through voluntary efforts and municipal regulations where towns chose to enact them. But despite the best efforts of the VTDEC, the VT League of Cities and Towns, and statewide and local lake organizations to educate lakeshore property owners and towns regarding the impacts of shoreland clearing and the creation of impervious areas, Vermont’s lakes are continuing to be seriously degraded by these practices. Statewide regulations are needed to protect Vermont’s lakes!"