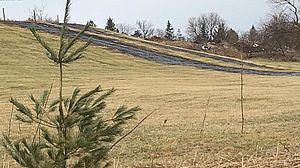 Brown stains running down the side of a manure pit in Bristol, VT. Photo courtesy of VT Agency of Natural Resources.

The Lake Champlain Committee (LCC) is no stranger to defending Vermont’s clean water laws. In December 2019, LCC was part of a coalition of environmental organizations that issued a press release on the unlawful emergency exemptions for farm manure spreading that result in pollution discharges into nearby waters. “The blanket emergency exemption doesn’t hold water,” said LCC’s Executive Director, Lori Fisher. “It makes no sense to enact a ban and then waive it at the expense of our waterways. State agencies need to be planning in advance for the reality of a wetter environment, not making exemptions standard practice.”

The split oversight of water quality between the Agency of Agriculture and the Agency of Natural Resources causes confusion, delayed enforcement, and pollution in Vermont. Vermont Public Radio’s senior reporter, John Dillon, says, “The temporal nature of these things and the response time, because of the division between two agencies, I think is one issue. The other issue is that they don’t always agree on what is a discharge and that can add confusion.” In addition, farmers are operating under a new regulatory environment and receiving low prices for their product, so running their businesses is not easy. John thinks, “Everybody’s heart is in the right place, except there are a few bad actors there who are probably trying to slide by under the regs.”