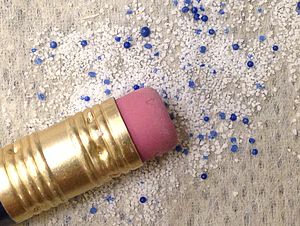 Tiny plastic microbeads used in personal care products are bad for waterways. Photo courtesy of Alliance for the Great Lakes.

New York Senator Kirsten Gillibrand was in Plattsburgh in late July to muster support for a bill to ban microbeads from our nation’s waters. The proposed bill would amend the Federal Food, Drug, and Cosmetic Act to prohibit the distribution of any cosmetic that contains synthetic plastic microbeads. LCC has been a strong advocate for state and federal legislation to ban the beads.

Plastic microbeads are found in personal care products like facial scrubs, body washes, hand cleansers, and toothpaste. They are designed to be rinsed down the drain, but are too small to be captured by wastewater treatment plants. They subsequently have been found in large bodies of water across New York State, where they concentrate toxins and can be ingested by birds and fish, posing serious environmental and health risks. An April 2015 report released by New York Attorney General Eric T. Schneiderman’s office found that microbeads were present in 74 percent of water samples taken from 34 municipal and private treatment plants across New York State.

“These tiny pieces of plastic have already caused significant ecological damage to New York’s waterways, and they will continue to do so until they are removed from the marketplace. That’s why I introduced bipartisan legislation to federally ban microbeads across the country,” said Senator Gillibrand. “Plastic microbeads are too small to be stopped by normal water treatment systems, and they collect toxins in the water that harm not only fish and birds, but also the people in this region who rely on them for food and wellbeing.”

LCC staff scientist joined Senator Gillibrand at the microphone. “Scientists have found high concentrations of plastics in U.S. waterbodies, wherever they have looked for them including on Lake Champlain’s beaches, and in the outflow from wastewater treatment plants in the North Country.” He said. “There are numerous studies documenting the physical and toxicological effects of plastic in the environment. Plastics adsorb toxins including PAHs, PCBs, and DDT.  Some microbeads are the size of fish eggs and look like food to fish and other aquatic organisms - an all too literal ‘junk’ food. There are plenty of effective soaps, toothpastes and body scrubs on the market that use natural substances as cleaning agents. Substances like powdered nut shells, bamboo, or apricot seeds. Why use plastics?”