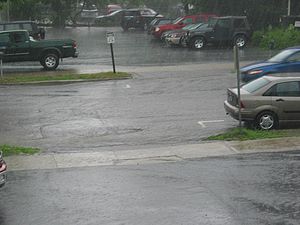 Pollution loading from developed lands remains one of the most difficult sources of phosphorus to control. The Lake Champlain Basin Program (LCBP) recently released two requests for proposals for studies that could improve management of developed lands in the New York portion of the watershed.

One project would outline a program to better manage New York back roads. Roadways become part of the stream network during a rainstorm or spring melt.  Frequently roadside ditches discharge directly into streams, lakes or wetlands. Eroding banks and dirt roads can be a significant source of phosphorus to Lake Champlain and other waterways. Better management of back roads is one way to reduce pollution from existing developed land. Since 1997 Vermont has provided grants and technical assistance to communities through a better back roads program. LCBP is hoping that something similar can be established in New York to deal with this important source of pollution loading.