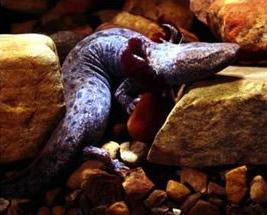 The largest known population of mudpuppies on Lake Champlain was found recently in the Lamoille River when over 500 of the reclusive nocturnal amphibians were killed by chemicals added to the river to kill sea lamprey. It is unknown how many mudpuppies survived. Mudpuppies, particularly juveniles, are known to be susceptible to the lampricides and have been affected by many treatments around the lake. Fewer than 200 mudpuppies were killed in the largest prior die-off on the Ausable River.

Mudpuppies are large salamanders that never lose their external gills. They spend their entire lives in the water and populations are extremely difficult to survey. They feed principally on small invertebrates. They are long-lived and do not reproduce until they are about six years old. The first mudpuppy ever described by science came from Lake Champlain. In 2002 the state of Vermont’s Reptile and Amphibian Species Advisory Group recommended that mudpuppies be listed as threatened in Vermont, but the Agency of Natural Resources did not accept that recommendation.

The 1999 evaluation of the sea lamprey control program tried to determine whether lamprey treatments had a significant impact on mudpuppy populations. The authors concluded that because mudpuppies were killed in two subsequent treatments of Lewis Creek in 1990 and 1994 that, “individuals survived the first treatments and/or immigration to treated sections took place,” and thus “no long-term adverse impacts have been experienced by mudpuppies”. However, during subsequent treatments in 2002 and 2006, no mudpuppy mortalities were found which, by the same logic, would then suggest adverse impacts on the population had indeed occurred, though caged mudpuppies during those treatments were not killed.

Although sea lamprey are a native species whose populations are currently high enough to threaten the long-term wellbeing of other native species, the death of over 500 mudpuppies in the Lamoille River lamprey treatment is shocking and disturbing. Wildlife management agencies must do a better job at mitigating impacts to non-target species during sea lamprey control efforts. The Lake Champlain Committee has worked to identify and develop means of controlling sea lamprey that minimize the use of pesticides.