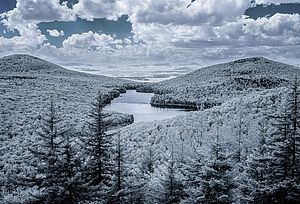 Groton State Forest sits astride the boundary of the Lake Champlain and Connecticut River drainage basins in the towns of Groton and Peacham, Vermont. Photo by Worlwide Elevation Finder.

Like a strand of silken thread spun across an expanse of air by an ambitious spider, a river forms a line across the landscape. Its wandering path can be followed upstream, and sometimes traced to a single beginning high on a mountainside or at a spring.

But a lake, like a spider's web, arises in many places at once. So Lake Champlain has its origins west of Saranac Lake in the Adirondacks and in Vermont's Northeast Kingdom. Its headwaters are at once in the towns of Rupert and Dorset in southern Vermont, in the mountains of Quebec west of Sherbrooke, and anywhere that waters begin a journey that will lead through tributaries and rivers to the lake.

In short, the lake begins at the fringes of its drainage basin, an area the size of Massachusetts. And though we do not often realize it when we're swimming, fishing or boating on the lake, our experience of the lake depends in part on the unseen interactions of plants, animals and water at these far fringes of the basin.

Take for example, the hills of Groton State Forest, located some 50 miles east of the lake as the raven flies and more than 80 miles as the river runs. This vast, heavily wooded tract, criss-crossed by moose, bear and the occasional human, sits astride the boundary of the Lake Champlain and Connecticut River drainage basins in the towns of Groton and Peacham, Vermont.

The divide that separates the waters of Lake Champlain from those of the Connecticut is not a steep ridge knifing across the landscape, like the sharp-edged Front Range of the Rockies. Rather the divide snakes through a lumpy landscape of steep-sided hills with names like Silver Ledge, Hardwood Ridge and Kettle Mountain. In one place a brook twists to the south of Debby Hill and winds its way to the Winooski River. In another, a brook is blocked to the south and west by a shoulder of Hardwood Ridge, and instead cuts its way down to the east toward Lake Groton and eventually towards the Connecticut.

In between the hills are wide areas of relatively gentle slopes, where networks of beaver dams create broad and soggy meadows, and forests of spruce, fir, and yellow birch coat the landscape with a thick green fur. So how does this landscape relate to Lake Champlain?

During the hot days of mid-summer, when searing heat works to dry the rivers of the Lake Champlain Basin, the beaver meadows and the damp, cool forest floor serve as a reservoir for the Winooski River, gradually releasing moisture stored from winter snows and the rains of spring.

The water that flows from the forest during summer may have been stored in a number of ways. For starters, there are the beaver ponds -- hundreds of them, active and abandoned, forming extensive beaver meadows in places. The rush of water in the spring comes to halt behind each dam, filling the pond behind it until it overtops the dam and rushes on a few feet to fill the next pond. Over the summer, this stored water seeps gradually through the dams or laps over their tops.

During spring rains some water also filters down into soils beneath the forest, replenishing groundwater in the permeable layers of the soil and soaking the thick duff of needles and leaves that coats the soil. The soil and the needles and leaves soak up water like a giant sponge. Later, the groundwater seeps from the banks of streams to keep a gentle flow going year round.

Thus the hills of Groton forest, more than 1,000 feet above the lake and dozens of miles away, are connected by the cycle of the seasons and the essence of the hydrologic cycle maintenance of basic flows in the Winooski River, and thus to keeping summer lake levels up. By the same token, water stored in soils or behind beaver dams in the spring means less water in the lake at that time of the year, and thus areas like the Groton State Forest also serve to lower higher spring lake levels.

There is a dramatic contrast between these processes, which husband water for dry times and prevent flooding in wet times, and the processes that dominate in developed areas, such as downtown Burlington or the parking lot of the nearest shopping mall. In such areas, water reaches the ground unimpeded by vegetation, and rushes off of roofs, pavement and concrete into storm drains. The drains generally pipe the water to nearby water courses and sometimes to wastewater treatment plants; in either case, the bulk of the runoff rapidly ends up in major tributaries or the lake itself. Thus, during spring melt or heavy rains the rivers and lake receive a rapid pulse of water, rather than an extended slow flow. The result is a "flashy" flow pattern, prone to flooding in heavy rains, but ending up dry during hot spells. It is the undeveloped areas of the Lake Champlain Basin that keep our rivers flowing through summer and fall.

The contrast extends to water quality as well as water quantity. Water flowing rapidly over parking lots, roads, and even heavily fertilized lawns picks up nutrients that may cause excessive plant growth (from  lawn fertilizers and detergent gasolines), toxic compounds (from tires, leaking oil, auto exhaust, pesticides and herbicides), and pathogens (from dog excrement and other sources). The result is that streams may be polluted just from improperly handled stormwater runoff, independent of any problems with toxic waste dumps, landfills, or wastewater treatment plants.

In undeveloped areas, such as Groton State Forest, water filtering over leaves and soils picks up far fewer pollutants. Beneath the heavy coat of forest there is relatively little erosion, and the small lakes and beaver ponds work to catch any silt that might otherwise muddy the streams. With minimal erosion, few paved roads, and only a few dozen septic systems near each pond or lake, the water contains few nutrients, pathogens, and toxic compounds. Streams remain clean.

Though they may seem far from the lake, the fringes of the basin, particularly undeveloped lands, are a critical piece of Lake Champlain's waters.