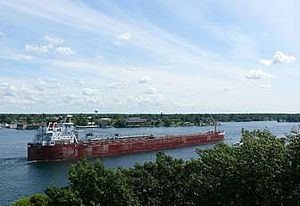 LCC was formed 50 years ago to prevent Lake Champlain from becoming an international seaway for ocean going vessels. Photo from wikimedia.

Throughout the year, we will share a series of special feature articles in commemoration of the Lake Champlain Committee's 50-year anniversary. Here is the first one!

What do zip codes, the smiley face symbol, the Beatles, James Bond movies, push button phones, and the Lake Champlain Committee have in common? They all debuted in 1963. On May 17 of that year, a group of 93 concerned citizens met at the Middlebury Inn to organize in protest against a proposal to construct a shipping channel from the St. Lawrence River to the Hudson River utilizing Lake Champlain. This was the first official meeting of the Lake Champlain Committee. The stated purpose of the organization at the time was “to oppose the construction of the Champlain Waterway as being a project of little or no value to the economy of the states of New York or Vermont and especially of no value to the economy of the communities along Lake Champlain and an unjustifiable waste of taxpayers money and through this opposition to preserve the purity of the waters of Lake Champlain and to promote its greatest economical potential – recreation.”

The idea of a Seaway between Montreal and New York City had powerful support. An inland route would chop over 1,000 miles off the trip between the two ports. Developers dangled visions of thriving lakeside communities catering to the passing vessels. Less than a week after LCC’s organizational meeting the Vermont Senate agreed to spend $10,000 to finance a Champlain Waterway Commission. The Burlington Free Press reported, “This commission is clearly ‘loaded’ in favor of the waterway,” and that the Senate bill had pre-judged the waterway to be “of immense economic benefit to Vermont.”

Over the course of the next four years the Lake Champlain Committee would systematically tear apart assumptions of economic benefit and bring to light the tremendous ecological damage that could be expected from construction of a Seaway. LCC pointed out that the communities along the Hudson River had failed to benefit when that channel was deepened and the port city terminus of Albany had in fact lost population while comparable up-state cities without a port had grown. LCC noted that the then new St. Lawrence Seaway was operating at a loss and not even able to pay the interest on construction bonds. By the time public hearings on the project were held in Albany, Burlington, Plattsburgh, and Canada, the strongest voices would be those of the opponents. Even the Senate’s Commission backed off their initial strong support.

The voice of LCC at the time was captain C.E. Dunton, co-chair of the organization. Captain Dunton had retired to Salisbury, VT following a 32-year career in the merchant marine. During his professional career he had seen the ecological costs of unfettered commercial shipping traffic. He was also able to articulate the limitations of Lake Champlain as a conduit for commerce and dispel any arguments that such an inland route would actually reduce shipping times due to the slow speeds that would be required in the narrowest passages.

On July 11, 1967 the International Joint Commission released their ruling on the Seaway project. They found that a proposed Seaway, waterway, or improved canal by any route was economically unfeasible and recommended the U.S. and Canada “pursue policies designed to preserve and enhance the natural beauty, the water quality, and the recreational potential of the Champlain-Richelieu area”. Their decision followed closely along the recommendations of LCC.

Following that victory the Executive Committee of LCC decided that the organization should continue to advocate on behalf of the lake. Captain Dunton said the Lake Champlain Committee “must not and will not cease to be interested in protecting and preserving the purity of the Lake waters. The pollution now present in Lake Champlain must be reduced and evidence eradicated. Our policy for action must be logical, intensive, positive, and effective. Our tools shall be persuasive publicity plus honest intentions.” LCC still follows these principles today.