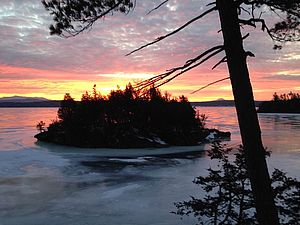 100,000 years ago, winter in the Champlain valley was a lot longer. The last glaciers of the ice age filled the Green and Adirondack Mountains, carrying vast amounts of earth that scraped the land like sandpaper, deepening the valley that would one day hold Lake Champlain.

It wasn’t until 18,000 years ago that these glaciers would retreat to the north, shedding vast amounts of meltwater as they went. The ice that still loomed over the Canadian border walled in the glacial meltwater, which formed a vast lake that is today referred to as “Lake Vermont”. These were some of the earliest days of Lake Champlain, when it stretched from the glaciers in the north to the Green Mountain foothills in the south. What are today high mountain peaks were then isolated islands.

12,000 years ago the glacial ice dam failed, and much of Lake Vermont poured out into the Atlantic Ocean in what must have been a catastrophic flood. Ocean water quickly rushed back in, however, as the weight of the glaciers had depressed the land lower than sea level. For the next 2,000 years the Champlain Sea – deeper than Lake Champlain, and shallower than Lake Vermont – filled the valley with brackish water. The bones of whales and seals from this time can still be found in the old lakebed, and present-day lamprey and rainbow smelt live on in the lake after adapting to a freshwater existence.

Over time the land depressed by glaciers rebounded, and the Champlain Sea was cut off from the ocean. Thousands of years passed. The water cycle diluted the seawater until there was no salt left, and the land continued to rise. The lake shrank until it reached the current size of Lake Champlain – no less breathtaking, in its own way, than the original Lake Vermont.

To read more about the history of Lake Champlain order a copy of LCC's award-winning book, “Lake Champlain: A Natural History”. Written in a light, engaging style by former LCC staff scientist Mike Winslow, with black and white photographs and detailed pen and ink illustrations by Libby Davidson, the book will help readers discover and understand the lake’s rich and diverse resources.